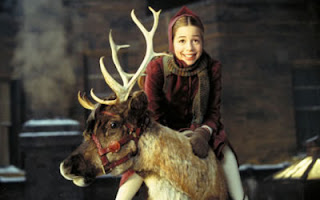 Attempting to outline the plot of the 2003 Christmas/fantasy/comedy/drama is akin to unraveling a Geordian knot. And, no, that wasn't a typo - it was something far worse: a pun. This was directed by LeVar Burton, who also gets a brief cameo. It stars Christopher Plummer, Kevin Pollak, Whoopi Goldberg's voice, and a bunch of Canadian actors you've never heard of.

The movie opens with a sledding montage showing a pair of kids enjoying a winter day together. Eventually, they head home and say goodbye forever - one is moving away. The other is so devastated, she retreats to her room. A week later, and her parents are still unable to get her to cheer up. In an attempt to salvage Christmas, they call in the mother's globetrotting sister, Aunt Millie, who flies in and starts telling her depressed niece a story about another friendship, long ago...

It's around this point that it becomes apparent the characters we've been following for the last ten minutes (give or take - I wasn't timing) are just part of a frame story, and the real action is set in the past. This is instead the tale of a girl named Katie who lives with her parents and two brothers during what seems to be the 1930's. Her love is ice skating - she goes every chance she gets - and eventually impresses an old Russian who offers to give her lessons. Katie has no idea who he is at first, but his mother recognizes him as a retired Olympic gold medalist. He teaches Katie a great deal, and the two build a friendship.

Cut to the North Pole, where a magical reindeer named Blizzard is born. She's the daughter of Blitzen, who'd wanted a son to one day take his spot. Santa's lead elf, Archimedes, dislikes her at once because she looks unusual.

As she grows up, she discovers a love of flying, which gets her into more trouble with Archimedes, who's a stickler for rules. Flying, we're told, is one of three magical powers reindeer can have, the others being invisibility and an empathic connection to children in pain. No reindeer in the history of the North Pole has ever had all three powers, so obviously Blizzard will be using them casually before long.

In between cuts to establish the frame story as a complete facsimile of the one from Princess Bride, we catch up with Katie, whose life takes a turn for the worse. Her father loses his job at the mill, and they're forced to move to the city. She loses her friend and skating teacher, and she no longer has access to a public skating rink. When her brothers accidentally nutcracker her beloved music box, her heart breaks, activating Blizzard's latent psychic abilities. Despite the fact contact with the outside world is prohibited, she follows her reindeer-sense to Katie. Initially, the girl is terrified to see a large flying animal outside her window, but within a few minutes, they're the best of friends. They go skating/flying, and thanks to Blizzard's invisibility, she's able to remain unseen by other humans.

Katie is eventually goaded into skating at a private club by a snobbish rich girl named Erin. This gets Katie noticed by the instructor, who arranges for Katie to train there despite a lack of funds. When Katie's on the verge of qualifying for a major competition, Erin sabotages her skates - if she can't get replacements before the next day, she won't be able to compete.

Unable to think of a sane solution (like asking the instructor for help), Blizzard violates the two most sacred rules of the North Pole: she brings Katie there and "borrows" a completed toy intended for another kid. Katie wins the competition, then overhears Erin's father berating her for not doing better.

Katie befriends her former tormentor, but Erin runs away soon after. When Blizzard returns to collect the skates, Katie tells her Erin's missing. Using her mutant abilities, Blizzard discovers Erin's in serious danger. They fly to her just as she falls through some thin ice, pull her to safety, and fly her to land.

Erin is not nearly surprised enough by any of this.

In all the confusion, Blizzard forgets to grab the skates when she returns home. Unfortunately for her, she was seen earlier and ratted out to Archimedes, who assembles a council of elf elders and Santa. In the hopes of mitigating the damage, a couple friends of Blizzard fly to Katie's house to recover the skates. There's no logical reason for Katie to go with them, but she flies back with Donner, Jr. anyway, since it would make for a dull resolution without her present.

She arrives at the trial and bursts in, explaining that Blizzard broke the rules to help her and to save Erin. Santa pardons Blizzard with the condition she'll never be able to leave to visit Katie again. It's bittersweet until they discover the stupid moral that friends are in your heart or your psychic empathic reindeer powers or something.

Meanwhile, back in the frame story the girl realizes she can move on with her life. Plus, the end reveals Aunt Millie was Katie all along, which makes perfect sense if you ignore a thirty-year plot hole.

So, that's the story. How's the movie?

That's kind of another Geordian knot. It would be easy to dismiss this as bad, since plenty of elements were godawful. But that overlooks the fact that it did a surprising number of things well.

Let's start with that old Russian skater. They got a Czech actor to play the part, and he was kind of great. His delivery and even the lines themselves felt like they were imported from a better film. A lot of the stuff around Katie's story was solid, at least for a children's flick.

On the Santa side of things, it's a little more complicated. The effects around the talking reindeer were atrocious (CG talking mouths, incidentally). The matted flying scenes were uneven - there were a few decent sequences, along with some terrible ones. The movie's key effects scene where Blizzard flies around a skating Katie is hard to rate. On one hand, the scale is off, and the effect looks fake; on the other, it's a damned impressive sequence that looks a lot more expensive than it possibly could have been.

There are also a handful of details I really like about this version of the North Pole. It's pretty obvious this was made during the heyday of the Harry Potter franchise - Christopher Plummer's Saint Nick behaves a lot like Dumbledore, and his castle and the surrounding elf village are at least reminiscent of Hogwarts. And in my mind, at least, that's good. Really good, in fact. I wouldn't be surprised if others were annoyed by how blatantly this mirrors the Potterverse, but Santa as a wizard is the precise version I'd like more of.

On a larger level, I felt like the direction was better than the writing. The plot was overly complex and poorly structured, but I felt like most of this was put together competently. This is clearly a movie intended for an audience of preteen girls, and I think it offers a product that audience would enjoy. I don't think it transcends its limitations, but it's not horrible for what it is.
00's Comedy Drama Erin Snyder Fantasy Movie