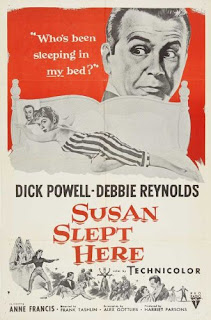 Susan Slept Here is a lighthearted romantic comedy from the classic age of cinema about statutory rape. And here I thought romantic comedies from the nineties were problematic.

The movie's two leads are Mark, played by Dick Powell, and the titular Susan, played by Debbie Reynolds. Mark is a Hollywood screenwriter with an Oscar to his name. Said statuette narrates the movie via voice-over. Think of it as a running gag devoid of humor or point.

Despite some success in his past, Mark's in a rut. He's not satisfied with the work he's doing, and he's not satisfied with his beautiful, rich girlfriend. On Christmas Eve, a police officer shows up with a seventeen-year-old delinquent, explaining that Mark had expressed interest a few years earlier in making a movie with a character like this. The cop caught the girl (Susan, obviously) after she attacked a sailor with a bottle, but he doesn't want her to spend the holidays in jail. Instead, he has the idea of relinquishing her to Mark's custody for a few days, so he can interview her.

At first, Mark isn't interested - he barely remembers what the officer is referring to - but he eventually takes pity on the girl and agrees to help her out.

It should be noted Susan hasn't expressed interest in being helped by him and is deeply suspicious of Mark. But before the police leave, the cop's partner reminds Mark that Susan is just seventeen, so he'll be arrested if he touches her.

After failing to pawn Susan off on his secretary, Mark eventually takes her in. They bond over Christmas Eve playing cards and talking. The next morning, Mark gives her a mink coat he'd been planning to give to his actual girlfriend, a senator's daughter who owns dozens of the things already.

Susan falls for Mark fairly quickly and kisses him under the mistletoe. Soon after, the police show up. Despite the fact it's still Christmas, the chief learned about the situation and ordered Susan brought in at once. Mark manages to send them on a wild goose chase while he desperately tries to figure out a way to keep Susan out of jail. Naturally, he convinces her to travel with him across state lines to Nevada and get married.

It should be noted that I am not making any of this up.

To be fair, he doesn't view the marriage as real. Or, to put it another way, he doesn't actually fuck her. This is a plot point. He spends the night dancing with her until she becomes so tired she faints, then he takes her in a taxi back to LA. Once there, he hands her over to his friends and takes off for a secluded lodge where he can write for a few months.

In case it wasn't clear, Susan was led to believe her marriage was 100% legitimate (this was the only way Mark could convince her to say yes). So when she wakes up the next day and discovers her new husband has taken off, she doesn't take the news well. Likewise, she's less than receptive when he sends his friend to convince her to sign an annulment.

A contrived misunderstanding too convoluted to get into causes Mark to think Susan's pregnant with his best friend's child, and he races home in a jealous rage. When it's pointed out to him that he's behaving like a jealous husband, he finally comes to realize he actually married the right woman for him.

The movie ends with them reunited and drifting towards the bedroom as Susan unbuttons his coat.

She is still seventeen. He's still thirty-five. There's a recurring joke throughout the movie about how he's a year older than Susan's mother.

And - I want to make sure this doesn't get lost or forgotten - none of this is framed as a psychological horror, crime story, or tragedy. Nope: this is a rom-com.

If you need to stop reading long enough to throw up, I'll understand.

I don't think I need to say that the premise of this is complete trash, but... you know what? Let's be safe: the story concept is trash, and I hope whoever wrote it wasn't permitted within ten miles of anyone under the age of 18. The fact the male lead is a screenwriter only ratchets up the sense that this was written as some sort of perverse wish-fulfillment.

Aside from that, the movie's fine. I honestly wish it weren't, but the truth is the comedy - while definitely uneven - works often enough to be amusing. Much of the humor is mined from Hollywood tropes, including a mid-movie dream sequence that's well designed and choreographed. That said, the voiceover narration provided by Mark's Academy Award is boring, pointless, and not at all funny. But even those jokes tend to work better than, say, the ones dancing around the subject of statutory rape.

Aside from the short dream sequence, the movie is never better than fine. If anything, the humor and structure are more reminiscent of old sitcoms than anything else. I didn't time how much of the movie was set in Mark's apartment, but I'd conservatively guess about 50% - this didn't feel like it cost a great deal to produce.

Reynolds is fantastic in the role of Susan, though her performance is something of a double-edged sword. Her mannerisms and speech patterns do an excellent job selling the youth of her character, which serves as a constant reminder that Susan is less than half Mark's age. With an age difference that absurd, you'd almost think this was being made... literally any time in the history of cinema.

The holiday elements are pretty self evident. Christmas serves as something of a catalyst for the plot, inspiring characters to behave differently. Decorations permeate the first half of the film and serve as visual reminder that time has passed when they vanish.

Unless you have a real soft spot for old romantic comedies, I'd advise avoiding this one (though I'd make an exception if you're a big enough fan of Debbie Reynolds). The movie's premise was in extremely bad taste in 1954, and it's gotten more disturbing over time. There were points where I found myself hoping it was going to pivot and turn into a satire addressing the loophole permitting sexual relationships with minors in cases of marriage, but instead it doubled down and celebrated it as a fairy tale ending.