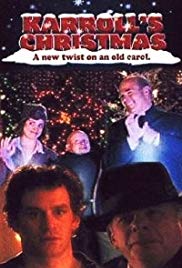 This made-for-TV comedy focuses on Allan Karroll, a man who hates Christmas because... Wait! Come back!

I know, I know. Christmas comedies made for TV are almost universally terrible. But while this one isn’t a work of cinematic brilliance, it’s definitely exceptional among its type.

I was skeptical of the beginning too. It seems like so many of this genre, presenting a protagonist who has to learn a lesson because they don’t unconditionally love Christmas to an unreasonable degree. However, while Allan’s irritation with a work presentation going poorly and a confrontation with his nasty neighbor are exacerbated by the Christmas season, he’s just average prickly until dinner with his girlfriend Carrie. Then he becomes downright unlikeable, as he can’t let his irritation go and doesn’t even notice that said girlfriend is trying to be romantic (and secretly planning to propose to him).

They go home together, but his neighbor starts stealing his electricity (via Christmas lights) to run a snowblower, and Allan can’t resolve it or let it go. Carrie takes off, and he’s left alone.

The Allan-and-Carrie plot is resolved eventually, but it’s fairly by the numbers. Happily, the A-plot is actually between Allan and his neighbor, Rosecog, played by Wallace Shawn. You see, it turns out that this movie is the most unique spin on A Christmas Carol I’ve had the pleasure to sit through. Rosecog is scheduled for a Christmas ghost intervention, but they get the house wrong and proceed to hassle Allan, refusing to believe at first that he’s not Rosecog. When the ghosts finally accept that he’s not Rosecog, they talk him into taking the Christmas journey anyway so they won’t get in trouble for going to the wrong house.

Allan learns how Rosecog got to be a crotchety, lonely old man. He witnesses how he became estranged from his daughter when he missed the death of his wife due to work. He sees how a man who started out believing in empathy and dreams (incidentally, he was, and Allan is, a writer of greeting cards) became beaten down by the world when he lost sight of the people who meant the most.

Also, we learn that Allan hates Christmas because three years earlier, he made a flashy, ridiculous, public proposal to his then-girlfriend (not Carrie) and she turned him down.

That scene is funny, although the reaction from the ghost of Christmas Past (a Jewish comic in life) is even funnier. All the emotional scenes with Rosecog, however, I found legitimately moving and poignant.

Finally, we get to the Ghost of Christmas Future, played with a friendly, snarky sadism by Verne Troyer. After that, Allan wakes up and decides that he’s going to help Rosecog. After a false start borrowing (and breaking) the Ghosts’ Universal remote, said Ghosts agree to stick around and help. Unfortunately, their attempt to scare Rosecog straight without the usual Christmas trickery puts him in the hospital with a minor heart attack. Allan finally gets through to him through simple compassion, and the two men both decide to get their lives back on track.

Rosecog reconciles with his daughter and makes up for some other nasty deeds, and Allan makes up for some of his obnoxious behavior as well. Then he manages to make another flashy, ridiculous public proposal (to Carrie), and for some reason, she says yes. This was the biggest misstep, I think. It was fine that they got together, it was fine that he wanted to be clear how much she meant to him, but really the lesson should have been don't put someone on the spot with a flashy public proposal. Especially don’t interrupt your girlfriend’s job (she’s a concert cellist) to make yourself feel better.

Other than that and some awkward costuming around their spin on Jacob Marley (the joke is he’s related to Bob Marley), this was a surprisingly solid Christmas flick. It was funny, it was sweet, and it used its TV-scale budget for just a few effects where they would have the most effect. If you need a general crowd-pleaser for a family party that won’t make you hate yourself, you might consider tracking this one down.
00's Comedy Lindsay Movie