Book Review: The Cricket on the Hearth 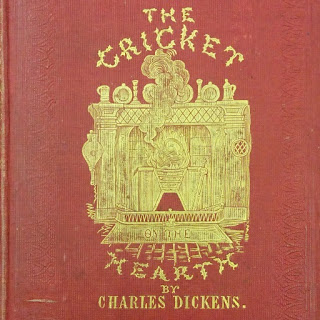 
The Cricket on the Hearth: A Fairy Tale of Home
Charles Dickens, 1845

This is the only one of these stories that I had heard the title of before doing any research. Like The Chimes, it’s not explicitly a Christmas story (it’s set in early January), but it was released in December as part of Dickens’ sequence of illustrated holiday novellas. Unlike The Chimes, there’s a lot to enjoy about this one.

The Cricket on the Hearth is sort of like if Dickens wrote a romcom. There’s a little supernatural stuff and a little moralizing, but most of it is just delightful character studies and misunderstandings that get resolved to everyone’s happiness at the end.

The story starts with Dot Peerybingle, a young woman happy in her home and her life with her older husband, John, and their infant son. One night her husband (a deliveryman) brings home a lodger, an apparently deaf old man whose origins are something of a mystery. That day they also find out that the mean miserly toymaker Tackleton is engaged to Dot’s friend from her school days, May. Also friends with the Peerybingles are Caleb Plummer, a poor man who works for Tackleton, and his blind daughter.

Tackleton imposes himself and his young fiancé on a meal the Peerybingles and Plummers regularly share, in the hopes that John and Dot’s apparent happiness (not that Tackleton believes that they are truly happy) will impress itself on May and reconcile her to the match. This is complicated by the fact that Caleb’s daughter fancies herself in love with Tackleton because her father has been lying to her about their financial straits and the kindness of his employer in an effort to make her happy.

During all this, Tackleton takes John aside and shows him a secret - the mysterious lodger is, in fact, a young man, and Dot is having clandestine, emotional conversations with him! John is devastated that his wife could betray him.

That night, Dot, John, and the lodger return to their house. Dot knows something is wrong and retreats from John. He contemplates murdering the lodger in a rage, but is stopped by the cricket on the hearth (mentioned several times before this as a kind of lucky house-spirit). The cricket sings, and in a lengthy vision, John sees all the things that he and Dot have shared. In the morning, he declares to Tackleton that if Dot would be happier with a younger man, he is sorry to have trapped her in a bad match, that she was never anything but kind and loving to him, and he wouldn’t resent either of them.

Tackleton storms off in astonishment, but Dot clears everything up with John: she is very much in love with him, and the lodger is, in fact, Caleb’s long-lost son Edward, and she was only helping him and May (childhood sweethearts) get to the church that very morning to prevent May’s mother from making her marry Tackleton. Caleb and Edward are reunited, Caleb tells his daughter the truth and she doesn’t love him any less, and even Tackleton comes back around and apologizes for being a cynical old jerk. Everyone lives happily ever after.

It’s a super fluffy story, but that just makes it work better as a cozy holiday tale. It uses Dickens’ flair for stylized dialogue and spectacular description to great effect.

I was especially struck by John’s confession scene. While there is a lot about the relationships in this story that is particular to the 1840s, I thought it was notable that his goodness was shown by his ability to a) let go of any feelings of anger or jealousy and b) consider that maybe marrying a much older man would be a choice a young woman felt forced into, and one she would regret. It’s a decent, progressive stance for the time.

The Cricket on the Hearth has been made into a couple films and one Rankin-Bass special. Maybe we’ll track that down.


Next time: the ominously titled The Battle of Life.
Book Lindsay