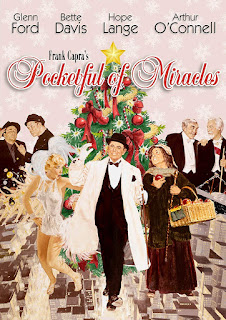 We didn’t know much about this movie when we turned it on, but I was met with two delightful surprises right in the opening credits. First, Peter Falk is in it. Cool, I thought, I love Peter Falk! Second, the movie is based on a previous screenplay, which was in turn based on a short story by Damon Runyon. Immediately I knew what to expect.

Damon Runyon, for the uninitiated, wrote short stories in the 20s and 30s about New York City under Prohibition. These stories are generally about gangsters and other people on the illegal side of society, often somewhat sentimental with a rough edge, and highly stylized. Adaptations generally turn up the sentiment slightly and enjoy leaning into the style. The most well-known adaptation is probably the musical Guys and Dolls.

Most of the characters from this movie could be dropped right into that show with no problem.

The lead is Dave the Dude, a speakeasy owner and gang leader who’s on the rise, possibly due to his habit of buying “lucky” apples from Apple Annie (Bette Davis), an elderly woman who sells fruit on the street and takes a cut from panhandlers and pickpockets up and down Broadway. At the start of the movie, a man who owed money to Dave has died, and he thinks he’s going out of business. After a visit from Annie, though, the deceased guy’s daughter Queenie Martin appears and agrees to become a nightclub star and help him make the club a success.

A few years pass, and one December Queenie has paid her father’s debts and is trying to get Dave to quit his life of crime and marry her, especially because Prohibition is ending. But a major gangster known as the King of Chicago is in town for a meeting with Dave, and Dave’s lieutenants Joy Boy (Falk) and Junior don’t want him to miss the opportunity to make the big time. So he needs a lucky apple.

Unfortunately for him, Annie’s had some terrible news. Her daughter, who was raised in Spain, has become engaged to the son of a Count, and her fiancé and his father want to travel to America to meet Annie before finalizing wedding plans. You see, Annie’s been stealing stationery from a hotel and lying to her daughter about her life for years.

After some back and forth, Queenie convinces Dave to help Annie pass herself off as a high society lady for the duration of the daughter’s visit. They have to rustle up a fake husband (a sophisticated grifter known as “Judge” Blake), a penthouse to stay in, new outfits, etc. Through all of this, there’s the threat that the King of Chicago will get sick of playing tag with Joy Boy and Junior and send someone to end them all. But that threat somehow never materializes.

There are some close calls with the Spanish consulate and society reporters, but Dave eventually manages to throw Annie a party with the cream of New York society, the Count is fooled and approves the wedding, the daughter and fiancé depart happily and none the wiser, and Dave agrees to marry Queenie and move out of town.

I glossed over a lot above, but the main takeaway should be that there are a lot of fun moments and characters in this movie, but it goes on too long and the narrative doesn’t add up to the sum of its parts in the end. There are too many dead-ends and elements that never pay off. The plot with the King of Chicago seems really important, and it seems as though Dave is going to sell him out to save Annie’s party (and incidentally, his own life), but that’s never confirmed. It’s never explained how Dave does some of the things that he does, and his change of heart about Queenie in the end just happens, without any buildup or emotional weight.

The two narratives are unbalanced as well. Once the daughter arrives, we hardly spend any time with Annie, so we never get much of her relationship with her daughter. We’re spending all our time with the other characters, and Annie recedes until her happiness is just a thing that other characters want abstractly.

There’s also a very dated scene where Dave and Queenie get into a physical fight that almost culminates in sexual assault, yet we’re supposed to root for their relationship.

Now all that said, there are a lot of entertaining individual scenes, it is often very funny, and if anyone was born to sell Runyonesque dialogue, it might be Peter Falk. The Christmas elements are limited to set dressing and music choices and a couple of passing references to the season, but it works; music from the Nutcracker cleverly highlights several key scenes. I think it’s probably worth tracking down for film history buffs (Capra’s last movie!) and Runyon completionists, but for everyone else, it’s just a decent but flawed film.
60's Comedy Lindsay Movie