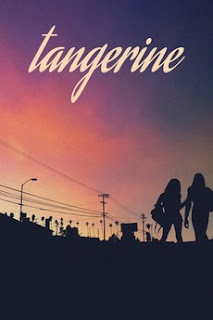 Tangerine is somehow both a broad comedy and a subtle, true-to-life drama. It focuses on one madcap day (Christmas Eve) in the lives of transgender prostitutes Sin-dee and Alexandra.

Sin-dee has just returned from a month in prison, and she finds out her pimp/boyfriend cheated on her while she was gone. She spends the day seeking out the other girl (Dinah) and the boy, intent on settling the situation. Alexandra, meanwhile, tries to blunt her friend’s more extreme impulses while she invites everyone (seriously, everyone but the cops) to a holiday cabaret performance she’s giving that evening.

The third plot thread belongs to Razmik, an Armenian cab driver who’s a frequent patron of Alexandra and Sin-dee. He struggles with the vicissitudes of his job and then skips out on Christmas Eve dinner, risking his marriage, to try to see Sin-dee after he hears she’s back in town.

The plot is almost an old-fashioned farce - woman scorned, attempting over-the-top revenge, takes the man back at the end - wrapped around a portrait of a friendship. Sin-dee abandons her quest briefly and mellows on Dinah after she drags the girl to Alexandra’s show, refusing to miss it. Razmik and his hapless misdirections and self-deceptions are both comic relief and a complicating element.

At first, the style of the dialogue might be startling for some viewers. These characters are people whose lives and attitudes are often dramatic, and it seems over the top if you’re not familiar with it. The amateur linguist in me wants to catalog the use of tone and emotion instead of word choice to define meaning. For example, “bitch” can mean a hated rival, a person unworthy of regard, a casual friend, a close friend, or a respected ally. It’s used constantly, in all of those ways and more.

The style of the film is striking as well. This movie was entirely filmed on iPhones with special lens setups. This sounds like a gimmick, and it is, but it gives the movie an immediate, tangible quality. You can tell that it’s actually filmed on streets and cars and buses. You feel the click of Sin-dee’s heels on the sidewalk. Long shots feel like seeing a real person passing on the street, and closeups feel voyeuristic.

The characters’ actions are often broad, frantic, and over-the-top, and their lives are amusing on that surface level. However, when they slow down you can see how young most of these characters are, particularly the three prostitutes. How they appear to be callous, but are each idealistic in their own ways. Sin-dee wants a true romance. Alexandra wants to be respected as a performer. Even Dinah, who seems the most grounded and realistic about her life, is startled when she’s abruptly abandoned after she thought she was playing by the rules. Each of them has to believe that she is cared for, and they cling to whatever they can.

Sin-dee and Alexandra’s friendship is the heart of the story, and it centers and grounds this funny and poignant window into the lives of people living on the edge of Los Angeles.
2015 Comedy Drama Highly Recommended Lindsay Movie