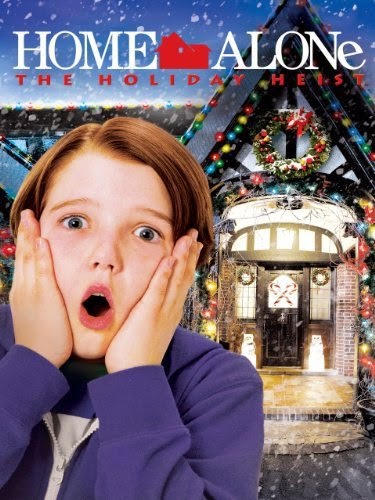 Do you remember the scene in the first Home Alone movie where Kevin tied a bucket of paint to a rope and swung it at the robbers? Have you ever stopped to consider what the entire movie would have been like from the perspective of the paint inside the bucket? I mean, I assume it would have started absolutely still and sat that way for hours on end, before being slightly jostled. Then, a few hours later, it would have sloshed around, before splashing against the wall. Finally, it would have settled again.

Mostly, it would have just been still. It would probably have dried a little as the movie progressed. Not a lot and certainly not quickly, but an imperceptible quantity of paint would have dried up.

While that's not the plot of the fifth Home Alone movie, I think it offers a nice encapsulation of the experience of sitting through the film.

That's another way of saying this movie isn't as shockingly awful as its predecessors. And that this improvement is a very, very bad thing for anyone watching it. The characters are, by and large, toned back a little, as are the horrible jokes and pratfalls. In their absence, the movie offers very little at all. Once again, think paint drying at the molecular level.

The premise involves a new family and lead. This time, it's a nuclear family who's moved from California to Maine in order for the mother to take a high-paying job as a VP.

"Where in Maine?" you're probably not asking, since the vast majority of you didn't grow up there, and therefore have no idea that the state is as big as the rest of New England combined (in your face, New Hampshire). Well, the movie doesn't specify a town, but we can deduce where they are based on various hints dropped throughout the movie. They're living in a relatively small town near to at least one privately owned mountain. Also, the town is always covered in snow in December (the next door neighbor is obsessed with the stuff). Oh, and there's a mall within walking distance.

Ah. I know. They've moved to the LAND OF MAKE-BELIEVE, because clearly no one associated with this film bothered to visit the state before flying to Manitoba to shoot their damned movie.

The new hero is Finn Baxter, a video game obsessed ten-year-old who's terrified of ghosts. His sister is a angsty teenager who just wants to move back to California. The actress playing her was the zombie-girl in Cabin in the Woods, incidentally.

Their parents are more or less there as comic relief.

Of course, there are three new thieves. Their leader is Malcolm McDowell, which begs the question, "What the hell is Malcolm McDowell doing in this piece of crap TV-movie?" Besides making Ed Asner feel better about taking a minor role as the mother's boss, I mean.

This movie is basically divided into two parts: the lead up to the break in, and the heist. The lead up is a lot of Finn interacting with his family, and the thieves interacting with each other. If anyone's surprised to hear that none of this is funny, you should really go back and re-read my reviews of parts one through four.

The thieves aren't actually after anything the family owns: they want an old painting hidden in the house by a gangster decades earlier. They try for it, but wind up having to run when the family returns. Finn interprets signs of their presence as further evidence the house is haunted.

Eventually, the parents take off to a Christmas party on top of the aforementioned private mountain owned by Ed Asner's character. Finn and his sister find a hidden room in the basement containing the painting, but of course they have no idea it's worth anything. Finn's sister winds up locked in the room, and Finn discovers that the thieves are breaking in.

Cue the obligatory construction of traps and the weaponization of the house. It's worth mentioning that these thieves really don't deserve the level of pain that gets inflicted upon them. Sure, they're trying to steal a painting, but they never try to hurt Finn, even when they capture him towards the end. McDowell's character does threaten Finn's sister in an attempt to keep her from damaging the painting, but there's very little indication he has any intention of actually causing her harm.

Of course, this doesn't stop the movie from celebrating numerous traps that should by rights be lethal. The movie's sadism isn't entirely reserved for these character, either. An adult gamer who becomes friends with Finn learns what's happening, and tries to reach out to his mother, who misinterprets his warning as a threat against her son. His good deed gets him doused with pepper spray. Also, early in the movie, Finn mistakes his father for a ghost and hits him with a tazer.

In addition to the gamer, there's a kid who lives next door who also represents several aspects of the series' archetypal "shovel man". The kid is obsessed with snow, since that's the only thing there is to do in Maine in December.

Again. Where in Maine is this again? I'm not saying there aren't areas that get that kind of snow, but triangulating one of those to an area that contains a mall might be a little difficult.

What else haven't we discussed? Oh yes, the sexism and racism. Remember how I mentioned there were three thieves, and one was played by Malcolm McDowell? There's also a woman and a black thief, and if you thought the producers were above stereotyping those characters, you're sadly mistaken. The black thief is incompetent and lazy, while the woman is obsessed with her ex-boyfriend.

Just want to remind everyone this came out two years ago. 2012.

Aside from that, there wasn't much in this movie that was especially offensive. The violence was implied or even more cartoony than the rest of the series. It was about as safe for TV as something can get while still tying up a 69-year old man then pushing him down a staircase. And, again, the resulting product is so lackluster, you actually find yourself wishing it was more horrible to give you something to react to.

When disgust sounds more appealing than what you're watching, it can only mean one thing. That proverbial drying paint I mentioned can only be beige.
2012 Adventure Comedy Erin Snyder Movie Sucks