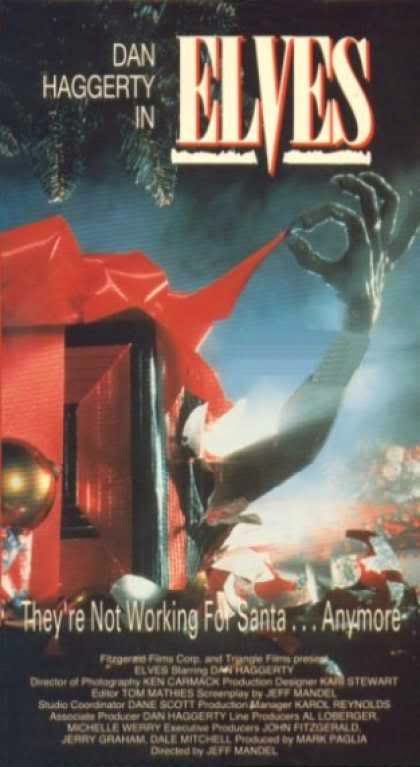 In this world, there are bad horror movies. There are crappy horror movies. Then there are horror movies so unbelievably awful you honestly can't tell whether they were intended to be comedic or not. Since those categories aren't mutually exclusive, it shouldn't come as any surprise that Elves is all three.

I first heard about this on Red Letter Media's Christmas Special. I immediately rushed to Netflix to add it to the yuletide queue, only to discover that Netflix has never heard of the movie. It turns out this isn't too surprising, since - as far as I can tell - it has never been released on DVD.

Unfortunately, someone had converted an old VHS copy and uploaded it to Youtube.

The movie is about a girl named Kirsten, whose grandfather is a Nazi scientist who impregnated his daughter to create a pure woman, so that one day she could be mated with an elf and give birth the master race and/or the Anti-Christ (the movie is slightly unclear on this point).

There's also a former detective who takes a job as a mall Santa after the elf (contrary to the movie's title, there is only one) murders the prior Santa by stabbing him repeatedly in the groin. This character says almost 100% of his lines in a calm, almost sedated tone. Even when Nazi enforcers are shooting at him, he seems kind of bored.

Elves, in the context of this movie, are more like what we think of as trolls. The characters seem to agree: they call it a troll several times until they're corrected. Even then, there's not much to connect this to Christmas elves (there's a scene that might imply some sort of connection with toys, but it comes off as more of Easter Egg than an actual story point). A generous assessment of the monster's design would be that it plays off of European folklore about evil elves. A more accurate assessment would be that it looks like there was a sale at the costume shop after Halloween. I'd have preferred a movie about killer Christmas elves to go with Gremlins and Rare Exports, but that's life.

It's difficult to convey how bad the acting and writing were. It really did reach the point where you couldn't tell whether the filmmakers thought they were being funny, scary, shocking, or dramatic.

That said, the movie was nowhere near as boring as most of what we watch. It didn't cross into "so bad it's good" territory, but it was definitely scratching at the door. There was one scene involving a car bomb that had both me and Lindsay laughing out loud.

We think that particular scene was supposed to be suspenseful. But we're really not sure.
80's Erin Snyder Horror Movie Sucks