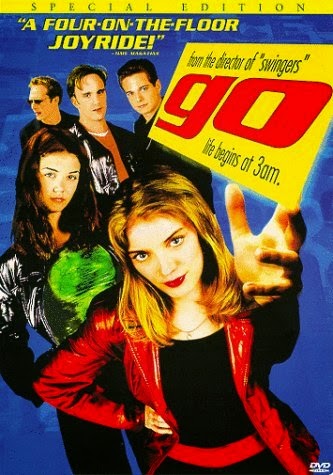 If you've never seen Go, here's what you need to know: it's a fantastic movie that's better experienced than described. Even though I'm barely going to mention the plot, I'm about to spoil the whole movie. So stop reading, watch the thing, then come back.

The genius of Go is its tone. What tone is that? Well... that depends whether it's your first time watching it. If you've never seen it before, Go is a disturbing, twisted, suspense movie broken up by bits of dark comic relief. On subsequent viewings, it's a fun and lighthearted comedic romp. It all comes down to point-of-view, which is exceedingly appropriate, since it's about point-of-view.

The film is set on Christmas Eve, a fact that feels almost incidental at times. There's a number of holiday decorations, but nowhere near the quantity most holiday-set movies incorporate. There are a few bits of dialogue alluding to the season, but by and large no one seems to care. Christmas isn't particularly significant to these characters' lives. But it is extremely significant to the structure.

The movie opens with a brief speech about being surprised by a gift. The rest of the movie proceeds to demonstrate this in the strangest manner possible. You spend the movie shifting around the characters and story, literally exploring it from multiple angles. The director plays with assumptions, creating false expectations through implication. Like a video game in a sweater box, Go leads you to a false conclusion before revealing the truth.

The film has always reminded me of Much Ado About Nothing, despite the fact there isn't a love story at its core. But like Much Ado, if a few scenes had unraveled differently, we'd be left with a tragedy. Instead, we're given a traditional, happy ending, a comedy in both the classic and modern sense. The entire movie is, metaphorically, a Christmas present.

Highly recommended to anyone who hasn't seen it. And, if you have, it's worth revisiting: there's a lot to explore here.
90's Comedy Dark Comedy Erin Snyder Highly Recommended Movie