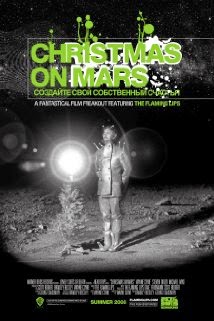 This movie can best be described as a pretentious art film trying to masquerade as a cult hit. The vast majority is in black and white and attempts to duplicate science fiction films from the 50's and 60's. They actually did this pretty well, setting aside the copious cursing. Oh, and the marching band with vaginas for heads.

Sorry. Probably should have put a *spoiler* warning before that.

At any rate, most of the visuals were in line with old movies. Based on still images, you could even be convinced you were getting ready to watch something campy or at least interesting. Instead, imagine a dimly-lit empty corridor made to look like a 60's SF set. Now imagine someone walking down it slowly while looking downcast.

That's about two-thirds of the movie.

There's very little narrative glue holding this together, and it's a bit of a stretch calling the malformed story line a plot at all. With that in mind, here's my best shot at the premise: this is set on a base located on Mars. We never really get a sense of how big the base is: there only seem to be a handful of characters, but there are indications the population is large enough that they might not know everyone living there.

Oh, there's also a green alien with antenna from a distant galaxy who regurgitates a glowing ball that grows into a ship, which shoots through the sky in an obvious reference to the Star of Bethlehem. More on him later.

The air generator is broken, there's a baby growing in a glass sphere, the main character is trying to put together a Christmas pageant, everyone on the station is going crazy, and the guy supposed to play Santa hallucinates the aforementioned vulva-headed marching band crushing a baby to death.

At the same time the Santa loses his mind, runs outside, and freezes to death, the green alien shows up. He's escorted inside, where the captain (who seems to think he's just someone dressed up, despite the fact he was found outside the base without any protective gear) yells at him for a hour or so, then casts him as Santa Claus.

I swear to you: this was not as interesting as it sounds.

He winds up fixing the base with his glowing magic chest. Later, the main character explains the significance of Santa Claus to him, and someone makes it snow. Oh, the baby is officially born, and the alien leaves.

So... basically we're talking about a warped nativity story set on Mars. This was made by members of the band, "The Flaming Lips," if you care. For what it's worth, the sound design is kind of impressive, and there are some decent old-school visual effects.

The movie, however, just drags for an hour and a half without actually delivering anything. It's not even clear what it wanted to be: satirical? A parody of old science fiction? An existential experiment? All of these things shoved into a blender? Whatever the intent, it fails miserably.
00's Erin Snyder Movie Science Fiction Sucks