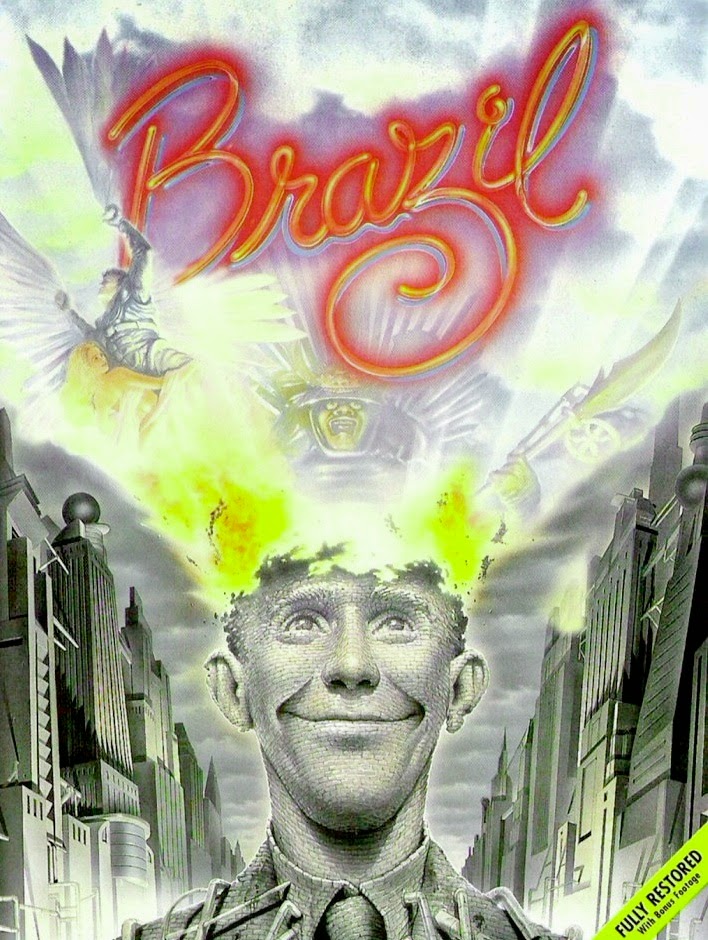 The title of Brazil is drawn from its theme song, despite the fact the movie is not set in Brazil, and the nation of Brazil has absolutely no bearing on the movie, nor is it even mentioned. It should be noted that they considered several alternative titles while the movie was in development, and - miraculously - Brazil seems to have been the best they thought of. You can read a bunch of the others on Wikipedia.

If I could be so bold, I might suggest calling this the Metropolis Christmas Special, which is how I'm going to think of it from now on.

Recently, I found this on a couple of lists of science fiction Christmas movies, which surprised me, since I didn't recall it having taken place at Christmas. Granted, it's been more than a decade since I saw this, and I didn't think much of it at the time. For years, my summation was simply: any ten minutes of Brazil is gorgeous, but there's no reason to watch more than that.

Maybe I'm just mellowing as I age, but I think my opinion has softened. I now think that there's enough variation to make the whole movie worth seeing.

I recommend doing so on fast-forward, however.

The protagonist dreams of something greater, by which I mean flying around and trying to save a floating woman wrapped in sheets. He winds up finding someone who looks like the woman of his dreams, but she's tied up in a convoluted mess involving an error where a man was accidentally tortured to death due to a case of mistaken identity.

As he tries to find and help her, he digs himself in deeper with government agencies that are bizarre, comical, and ruthless. Eventually, he goes crazy. He's captured by the government, but winds up escaping into his dream world, where he's effectively out of reach of his tormentors, who are still trapped in their dark nightmare.

Okay. Fine. Now why the hell couldn't Gilliam have told that story in a brisk hour and a half? Whatever - you're not here to read me rant about this thing's two hour twenty minute run time. You're here... for Christmas.

Christmas is essentially a character in and of itself in this film. However, in the context of Brazil, that means it's a repetitive 2-dimensional joke. It does, however, show up a lot. The holidays are ubiquitous, but they seem to keep coming back up, usually in the context of societal obligations or consumerism. There certainly doesn't seem to be much warmth associated with Christmas in the film, and it more compliments than contrasts the twisted setting.

It's certainly an unconventional way to spin Christmas, particularly in something that owes so much to film noir. But then Brazil certainly isn't lacking for visual brilliance: almost every image is awe-inspiring. Likewise, the actors are topnotch. What else would you expect from Robert De Niro, Ian Holm, and Michael Palin?

The story and message, on the other hand, feel like they're bogged down in random elements and weird turns introduced to disguise the fact there's very little substance underneath. In a shorter movie, this wouldn't have been an issue: I don't mind overlooking narrative flaws in exchange for art. But this was far too long to excuse the weak script.
80's Classic Dark Comedy Erin Snyder Movie Science Fiction