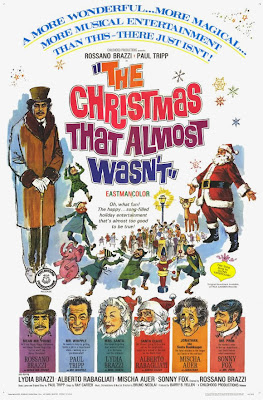 Wow. We were warned about this one, but it still managed to reach pretty significant levels of awfulness. But the awfulness pales in comparison to how mind-numbingly boring this is.

Here’s the plot: a cranky Snidely Whiplash type named Prune has bought up all the land at the North Pole, and now he’s charging Santa rent. If the jolly old elf can’t come up with the funds by Christmas Eve, he’s going to repossess the land and all the toys. For help, Santa goes to a lawyer who apparently wrote him a thank you note as a kid. Ooookay.

Early on they establish that Prune hates Santa because he hates children, especially happy children. He sings about this. Throughout actors repeat the name Prune ad nauseum as if saying the word, by itself, is a hilarious joke. The lawyer gets Santa a job as the first department store Santa. (Insert facepalm here.) Santa is afraid of meeting children while they’re awake, but gets over it. After singing about it. Prune cheats them out of their pay, and it looks like all is lost.

Oh, how I wish that all had been lost. Santa and Lawyer run into a kid out in the street, the kid yells a lot, somehow waking up just the children in this town, and they all bring their pennies to pay Santa’s rent. Prune is crushed by his defeat. Santa and Mrs. Santa and Lawyer deliver all the presents to that town in a photo montage bookended by a dollar-store-quality flying sleigh miniature. This is apparently the only town, because they now have time to deliver an accidentally 30-plus-years-delayed Christmas gift to Prune, thus magically making him a loving, happy person who creepily chases children through the snow.

The cast actually seems like they could be decent actors, but the material here is so thin and so terribly written that they have no hope of pulling it off. The production values are really low and the film is terribly shot.

There are songs. Oy, are there songs. They don’t even rhyme properly, or they rhyme a word with the same exact word over and over again. The entire dialogue track is overdubbed, I think, and every so often it’s not synced right. The only halfway-okay song is the opening title, and it’s only saved by the fact that it’s sung by Glenn Yarbrough. You don’t know that name? If you’ve ever seen the Rankin/Bass ROTK or Hobbit, you know that voice, trust me. He gives the insipid lyrics a little 60’s-70’s style folk gravitas.

Prune actually looks like he’s enjoying himself, and he directed it, so I guess that’s why he’s the only one with something vaguely resembling a character arc. Santa always looks like he’s going to cry, and the best thing I can say about the lawyer - kind of a knock-off-Danny-Kaye type - is that he’s mostly inoffensive. The worst thing I can say about him is that he also wrote the script.

There’s a gaggle of elves being exploited in the back room at Santa’s House. I don’t know if they just cast every short/little person they could get their hands on or what, because these folks seem totally out of place here. They either can’t act or were told to act like mentally challenged martians. Actually, since the film was made in Rome, it’s really very possible that these actors didn’t speak English. While everyone else is exaggerated but not too crazy in their costumes, the elves look like some intern was given a tub of bits of bright-colored clothing, some clown makeup and a gallon of hair gel, and told they wanted the elves to look like Munchkins. This intern had never seen The Wizard of Oz.

I cannot impress upon you enough how boring this was. The dialogue sets new standards for the definition of inane. It was only about 90 minutes, but it felt like it went on forever.

Finally, I want to go back briefly to the end of the plot description. It’s supposed to be a Christmas Carol reference, but Prune (up until 5 minutes earlier the villain, the avowed hater of children and childhood, the one with the “villain” mustache, that guy) runs out into the snow in his nightgown, and then chases a small child around a bench and finally physically tackles the kid to give him a present. Then he leads a parade of children into his house. There is no dialogue, this is under music.

I hope this is needless to say, but no one should watch this. Maybe, MAYBE if you are drunk and/or high and are on purpose watching terrible things. But I’m sure even in that situation you can find something less boring.
60's Comedy Crime Against Humanity Fantasy Lindsay Movie Musical