Crossposted from The Blue Fairy's Bookshelf

Hooray! Despite opening with an epigraph/poem that made me cringe (it started out rhyming, and then… stopped?) this was a much better collection of holiday cheer than the others I've read this year.

My favorite stories are starred(*). 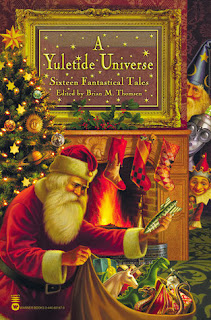 The Gaiman and Gibson are brief and forgettable, but the Matheson (this Matheson is the son of the more famous author) is a nice, subtle piece about a guy who runs into Santa on holiday in the tropics.

“Nackles” by Donald E. Westlake, 1964
Westlake is mostly a crime fiction author, and this little spooky story about the creative power of belief is well done, if not (in 2013) particularly original.

“Santa Claus vs. S.P.I.D.E.R.” by Harlan Ellison, 1968
Absolute shit. Extremely dated, pedantic, unfunny, and gross parody of a spy novel. Avoid this one at all costs. I'm already repressing having read it.

“O Come Little Children . . .” by Chet Williamson, 1989
This is a finely written piece about belief and the “real” Santa, along with parental fears and a decent twist.

“It’s a Wonderful Miracle on 34th Street’s Christmas Carol” by Brian Thomsen, 2003
The most recent piece, a trope mashup taking place mostly in a therapist's office, is also the one by the editor of the collection. It’s not terrible, but maybe he should stick to editing.

“The Yattering and Jack” by Clive Barker, 1984
While I found some parts of the ending unsatisfying, this tale of the struggle between a demon and an average man was often fascinating.

“Icicle Music” by Michael Bishop, 1989
A creepy ghost story that starts with a boy receiving a shotgun and a visitor.

“Miracle” by Connie Willis, 1991
Nope, not reading that one again. It’s not horrible, I just didn’t like it much.

* “A Foreigner’s Christmas in China” by Maureen F. McHugh, 1993
A poetic, lovely piece about travel, ghosts, and the paths people walk.

“Household Words, Or The Powers-That-Be” by Howard Waldrop, 1993
This was very very odd. Parts of this meditative, half-biographical, half-alt-steampunk-world story about Dickens and Christmas Carol are intriguing, but it never really goes anywhere. It felt like the author was just showing off a handful of ideas he really liked, without a real story to put them in.

* “A Kidnapped Santa Claus” by L. Frank Baum, 1904
An earlier version of this story was in The Life and Adventures of Santa Claus, but certain aspects of it are much more interesting in this. A handful of demons decide to kidnap Santa in order to cause the children of the world to indulge in vices. In the public domain!

* “How Santa Claus Came to Simpson’s Bar” by Bret Harte, 1873?
A Western! It’s got excellent style, and it’s a sweet story with rough edges, which is just right. In the public domain!

* “A Proper Santa Claus” by Anne McCaffrey, 1973
Just lovely, a fantastic story about a young boy and his ideas about “proper” art. Recommended for all who were young artists.

* “The Plot Against Santa Claus” by James Powell, 1970
FINALLY! Someone wrote an actual Christmas noir! Rory Bigtoes has a lot of problems as head of Security for Santa, what with threats against the big guy and civil unrest among the elf population over new toy production techniques. This is probably my favorite piece in this whole collection.

This is a much stronger collection overall than the others I read this year, despite a few missteps, and I can safely recommend it as a fun read. Just skip the Ellison.