By Lindsay - December 25, 2013
Wow, December flew this year, didn’t it? For me, it wasn’t just because the span between Thanksgiving and Christmas was as short as it can be. My job is more involved and takes more of my brain than last year, plus I have more outside-of-work commitments too. All that’s just to say that I’m a little sad that it’s Christmas already, I feel like I barely registered time passing.

I’m really glad we finally saw some Bing Crosby specials (Meta, 1, 2, 3, 4), and I’m also glad we eviscerated The Christmas Shoes. We also found a few hidden gems this year, perhaps most notably Rudolph and Frosty’s Christmas in July. Who knew that was good?

This is the fourth year, and Mainlining has become… a tradition. I don’t mean that in a sarcastic way, either. This: the watching of bizarre and terrible and wonderful Christmas stuff, collecting new music, new books and movies and decorations, finding more and different things to see and do, this is now part of how we celebrate the season.

Stay tuned as the year turns. We’ll probably go back to posting occasional ‘marginal’ works: those movies that have a Christmas connection but not a strong enough one to save for December. Our list of things to watch grows faster than we can check things off, after all. I picked up the first issue of a comic book about Krampus and the Secret Society of Santa Clauses; if the rest of the series is as good as the first issue, I’ll throw you a review by next year. 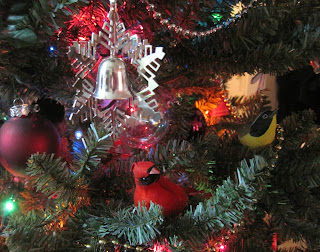 I used to have a complicated relationship with Christmas that was largely negative. Mainlining Christmas has given me a new way to engage; I still have complicated feelings, but now they’re positive.

I like being a geek about Christmas. I like knowing the songs, even the obscure ones. I like having complicated and engaged discussions about the merits of various animated specials.

Besides which, according to the Pew Research Center, I am far from alone these days: 8 in 10 Non-Christian Americans say they celebrate Christmas, and 32% of all Americans who celebrate say it’s more of a cultural than a religious thing.

I want to thank those of you who’ve been with us from the start: faithful readers like Jesse, Marci, Sam, and more; Shiraz for being patient with the apparent descent into lunacy; my mom for not pointing out every typo she spots; and thank you, new fans and friends (did you see we have a Facebook page now?)

Merry (secular gift-giving day we call) Christmas, everyone: I hope we’re a little part of your tradition, too.

Thanks the most to Erin, for coming up with this. I love Mainlining Christmas, because I do it with you.
Article Lindsay