Earthworm Jim: For Whom the Jingle Bell Tolls (1996) 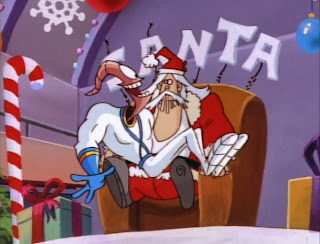 Earthworm Jim was both a series of absurdist video games and a short-lived animated show. This was actually the last episode. The humor and style owes a lot to The Tick, although Earthworm Jim is more random, I think.

In this episode, the cold opening shows us what happens if you write secret hideout on your roof with Christmas lights. The main plot follows The Evil Queen Pulsating, Bloated, Festering, Sweaty, Pus-filled, Malformed Slug-for-a-Butt, as she learns about Santa (from Earth TV) and decides to kidnap and brainwash him, so that he will help brainwash all the children of the world into doing her bidding. Jim, Peter Puppy and Princess What’s-Her-Name set out to save Santa

This was hilarious. Highlights include the dark side of working for Santa (including a drunken rant from Rudolph in a bar for anthropomorphised concepts), and how Jim et. al. find out about the Queen’s plan (via the psychic beard link between Santa and all mall Santas)

Sure, there was a joke here and there that hadn’t aged well, but there were also a couple that we were surprised made it to a saturday morning cartoon. I was also surprised how much I enjoyed Queen Slug-for-a-Butt. I was ready to cringe, but she was pretty kick-ass in her evilness.

The climax, and how Santa eventually saves Christmas, had us both agape. We were quite impressed with the research and the cleverness of this episode. (Side note: I am aware that the creator of Earthworm Jim is kind of an asshat, but there's nothing objectionable I spotted in this episode and he’s not listed as the writer here.)

It’s only 20 minutes, you should go ahead and check this one out.
90's Comedy Episode Fantasy Lindsay Science Fiction