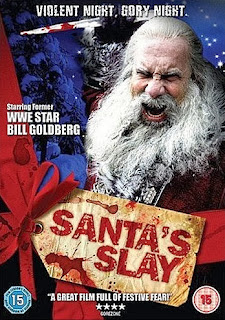 Like Saint, Santa's Slay takes the "killer Santa" concept a step further than most. Unlike Saint, it's surprisingly entertaining and a lot of fun.

The movie opens with Santa Claus, played by wrestler Bill Goldberg, interrupting a family dinner and killing all present. The fact the victims included Fran Drescher and Chris Kattan should give you a good idea for the tone they were going for.

The credits roll, and the movie jumps to the leads, a young couple who work at a Jewish deli. It's already Christmas Eve, and Santa starts knocking off minor characters almost immediately as the leads start piecing together what's going on. They're helped by the boy's grandfather, who's been preparing for this night for a long time.

Just to clarify, this isn't a psychotic killer dressed as Santa: this is the real deal, complete with an evil "reindeer" (well, a flying ox, but they call it a reindeer). He's the son of Satan, and he was bound to the job after losing a bet with an angel in disguise. For a thousand years, he's been forced to deliver toys and spread goodwill... and he's not happy about the situation. The duration of the bet is up, so he's free to run amok murdering people with Christmas decorations.

Some key exposition was delivered via a stop-motion sequence, which I appreciated. The movie was about as campy as you can get, complete with over-the-top gore. As a rule, I dislike gore, but this was too cartoonish to bother me. Overall, the movie is far more comedy than horror. For the most part, it doesn't even try to scare you: it knows the concept is funny and just runs with it.

The writing is fairly solid, and the twists - while not particularly surprising - are handled well. The movie's premise feels like it's coming out of a convergence of holiday specials and horror tropes: I was pleasantly surprised to find it had a grasp of both. There's not a lot to the back story, but what we get is satisfying. In the wrong hands, this would have been nothing more than an excuse for a murdering Santa. Here, there's a bit more to it: the story actually answers a lot of questions about Santa's powers and immortality. As a result, it's as much like a new, shockingly authentic spin on the Santa myth as it is a parody.

I didn't expect to enjoy this, but I really did. It's not brilliant film making, but it really isn't supposed to be. I've seen a lot of camp horror Christmas movies, and I'd pretty much dismissed the genre as a whole. But this one delivered on its concept.

At less than an hour and twenty minutes, it doesn't outstay its welcome, either. The movie never drags or gets boring. I can't believe I'm saying this about a Christmas camp horror film, but... if anything, it felt a little short.

If you're looking for some ridiculous dark comedy/horror to cast a shadow over your Christmas, this is a good choice. It's not as a good a movie as Rare Exports, but that's really an adventure story. This is more akin to Jack Frost... just far, far better.
00's Adventure Comedy Erin Snyder Fantasy Horror Movie