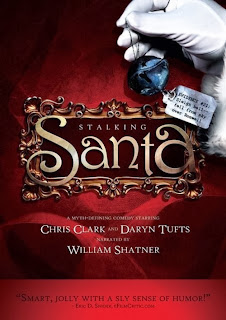 Stalking Santa is a good example of a cool movie made for virtually no money. To give you an idea of how little they spent, IMDB estimates its budget at $100,000, and it's narrated by William Shatner.

But the premise didn't require a lot of cash. The movie is a mockumentary about a self-proclaimed "Santologist" out to prove the existence of Claus. The writing is strong, and the direction effective. The movie borrows heavily from X-Files and takes the viewer in a number of unexpected directions - some surprisingly dark for a "family comedy."

The tone and genre switch gears several times, hinting at government conspiracies, fantasy, or science fiction, depending on the lead being explored.

Throughout the movie, the film cuts away to interview experts and children. Surprisingly, the kids don't come off as overly cloying. They stretch the tone, but... damn... their answers are adorable.

This is a very enjoyable film, but it does have a few issues. First, there's a disconnect between the main character and the resolution of the movie. The supporting characters are all sympathetic, even when they come off as foolish, but it's hard to feel for the lead given what he's putting them through. His quest for Santa Claus has taken a toll on his family: it's good comedy, but it creates an expectation for some real payoff at the end.

Instead, the film concludes abruptly. It's not the worst resolution they could have gone with, but it doesn't really fit the rest of the movie. Another five minutes providing some character development and growth would have given this resonance.

In addition, the movie has a couple of jokes that are a tad racist. Nothing egregious, but the name of a Chinese artifact made Lindsay and I cringe, and a punchline from an interview with a Thai character suggested a pattern. Neither of these jokes were truly awful, but both fed into stereotypes. If this had been made in the 80's, I'd overlook it, but not in this millennium.

That said, this is still a really good movie. We enjoyed it quite a bit: Stalking Santa offers a very inventive take on Christmas movies and delivers some great comedy on a shoestring budget. It's clever and definitely worth your time if you can track it down. Unfortunately, that's easier said than done: this never received a major release, and Netflix doesn't seem to have it in stock. Your best bet is to grab a used copy on Amazon or Ebay (you should be able to find one for less than five bucks, including shipping).
00's Comedy Erin Snyder Fantasy Highly Recommended Movie Mystery