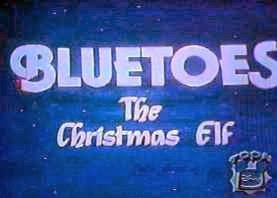 Gather round children, while I tell you the tale of Bluetoes, the Christmas Elf.

Bluetoes was born different than all the other elves, who mocked him for his short stature and wouldn't let poor Bluetoes join in their elf work. Then one Christmas eve, Santa came say, Bluetoes, with your toes so blue, won't you become chief operator in charge of stocking preparation and distribution? Then how the elves all loved him, as the special ended mercifully, and Bluetoes the crappy elf, was forgotten by damn near everyone.

Let me back up: I feel like I may have omitted some significant details.

Bluetoes the Christmas Elf was created by the Canadian Broadcasting Corporation, who you've probably never heard of because they probably don't matter. Presumably, they wanted to produce the next Rudolph. They wound up with something that doesn't even have its own Wikipedia page.

Information about Bluetoes' origins is difficult to uncover, due to two factors: first, as I mentioned above, it doesn't have a Wikipedia page. Second, it doesn't warrant me taking five minutes to see if I can find a fan page or something. And, honestly, I wouldn't trust a fan page to Bluetoes, because anyone who was a big enough fan of this thing to take the time to make a website devoted to it, clearly has something wrong with them.

But, based on the credits, it seems to have been based on a kids book, mostly likely copied by hand and exchanged by Canadian fir traders in the mid 1980's. At some point, there was a song written, as well, probably before the special, because otherwise it most likely would have had something to do with the special.

The song is cut in half and plays during the credits. In it, a crappy 70's folk singer describes Bluetoes as a mischievous elf, who learns a lesson or something. Doesn't really matter, anyway, because he isn't mischievous in the special: he's just unlucky. He screws everything up: he can't even pick ripe toys from the toy trees without it ending in disaster.

I'm just going to gloss over that.

His name isn't Bluetoes yet: elves, we are told, are named for what they do. For example, Chopper is an elf who cuts down trees. Another elf is named "Whitey". I'm assuming he's a white supremacist.

Small One wants desperately to help, but every time he tries, something goes horribly, horribly, stupidly wrong. Half the time it involves the special's antagonist, a large polar bear who is thwarted by water. At the end, Small One makes amends. They don't outright say the bear will put the star on top of the Christmas tree from now on, but they really don't have to.

Small One's only friend is a penguin, who is lost and needs to find his way home to the North Pole. I sincerely hope that Rakin/Bass sued the hell out of the SOB's who made this.

Small One promises to help the penguin get home, so naturally the two of them wind up in a sack on Santa's sleigh. Santa doesn't notice them, but he does discover he's missing two presents because... who cares why? Just go with it. Anyway, he takes off to get replacements, not realizing Small One is on the roof.

Small One thinks Santa's leaving for good, so he pulls a few toys out of his ass (or pockets - I forget which), then goes in to leave them for the kids. Lacking any wrapping paper, he comes up with the truly moronic idea of pulling off his own dirty socks, stuffing the toys in them, then leaving them to stink up the kids' room.

This, we are told, is where the stocking tradition originated.

He then leaves the kids' room to hang out on the roof. Apparently, having spent his entire life in the sub-zero temperatures of the North Pole wasn't enough to acclimate the elf to the cold, so he almost freezes to death in his bare feet. When Santa returns, he sees that the cold has turned the elf's toes blue. He changes his name to Bluetoes and decrees stockings will be a thing from now on.

Oh, one more thing. The special ends with the penguin with Bluetoes and the elves at the North Pole. In other words, he never makes it home.
80's Comedy Erin Snyder Fantasy Special Sucks