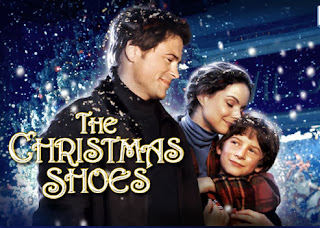 The Christmas Shoes: the legendary song by NewSong which has topped numerous lists for the all-time worst Christmas song ever recorded. As we all know, nothing this bad can go unadapted. Even before the song was finished being written, it was being turned into a book, which in turn became a televised movie in 2002.

And now, eleven years later, we sat down to watch it.

It probably did not want us to laugh our asses off for most of the movie. Oh, well: you can't get everything you want.

The Christmas Shoes starts out so bad it's good, then gets aggressively worse as the TV-movie goes on. I can't imagine watching this alone: you need someone with you, to help you retain your sanity. It's incredibly, amazingly - almost impressively - stupid. Written without a shred of nuance or actual depth, it uses every cheap trick in existence to elicit sympathy and compassion. It's like a kid pretending to cry so you'll feel bad and give them a cookie.

Do not give the people who made this movie a cookie.

This stars Rob Lowe as a depressed lawyer who's having TV-friendly marriage problems that could easily be solved by both people sitting down and having a simple discussion. Another family across town has a different problem: the mother is dying. The two plots are interwoven in a manner that's clearly supposed to suggest a grand, divine plan. The point of that plan is to kill a child's mother and maximize the amount of emotional development for all involved.

In this movie, not even God is a sympathetic character.

As the title suggests, the entire story hinges on a pair of shoes. No, I'm sorry: Christmas Shoes. And, yes, they are called that at least once in the movie.

The significance of the shoes is established throughout, starting with a scene where the sick mother starts crying while her son's teacher reads a fairy tale about shoes. I'm not entirely sure why he's reading a book of fairy tales to fourth graders, but I don't really care so I'll move on. Later, she tells a story about meeting her husband at a dance class. Yes, she loves to dance.

She loves to dance in shoes.

If you think this movie is above having her son tell her he bought her shoes to wear in heaven, you're grossly overestimating it. This is THE CHRISTMAS SHOES, and there's no line they won't cross in a desperate attempt to make the concept resonate.

Okay - there actually is one. The kid never says he wants her to have the shoes so she looks good when she meets Jesus. You'd have to be an absolute asshole to put a line like that in a movie. Or, you know, a song.

This is clearly intended to be a family movie: show this to any kid under the age of eight, and they'll be bawling. Anyone older should realize that every character, every line, and every shot is a cliche. And it's all tied together with a premise so monumentally stupid, it is almost unbelievable anyone would write a song about it, much less adapt that song into a ninety-minute movie.

But it's also about good people who do good things, like... help farmers against a corrupt environmental group trying to push them off their land. Yeah, that's right. It's not enough to make an aggressively pushy TV-movie about faith: they had to slip in some propaganda about evil environmentalists. Doesn't even move the plot forward.

This thing is bad, but don't make the mistake of thinking it's worthless. No, far from it: this thing is ripe for the MST3K treatment. Get some friends together, pour some drinks, and see how much you can stomach. We made it through the whole thing.