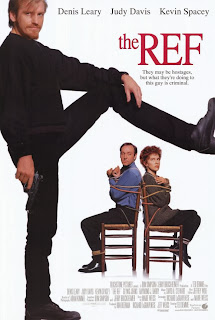 It's strange that it took me so long to see The Ref. It's relatively well known, but somehow it always slipped below my radar. But it finally came up on my Netflix queue.

The plot revolves around a thief who takes a dysfunctional family hostage on Christmas Eve to hide out from the cops. By and large, comedies about families with issues are just about the worst genre holiday entertainment has to offer, but miraculously, The Ref is actually pretty good.

While there's a long list of things this movie did wrong, the filmmakers made several extremely smart decisions that elevate this to something worth watching. First of all, they cut the slapstick down to a minimum. Second - and maybe more important - they wrote some depth into the main characters. If the husband and wife had been two-dimensional, this thing would probably have been as bad as Surviving Christmas. Well, maybe not that bad, but you get the point.

Fortunately, the husband and wife were well cast (Judy Davis and Kevin Spacey) and written with surprising depth. It takes a while to become clear: their first scene is in a therapist's office, and they come off as generic. But as the movie delves into their issues and their pasts, they gain progressively more depth, and their problems start to feel believable. By the end of the movie, I was sympathetic to both of them.

It also helps that the thief, played by Denis Leary, is appropriately dark. While the character is a decent person deep down, he still comes off as a hardened criminal, giving the movie some tension.

The movie falters when it incorporates the usual holiday movie cliches. The extended family is ruled by the stereotypical rich, controlling mother. The character is better here than most places, but she still feels like a convenient villain introduced to deflect blame from the leads. In other words, lazy writing.

Likewise, there are a handful of moments where the movie makes a cheap joke or injects some forced holiday cheer. The worst of these occurs at the end, when everyone suddenly resolves their issues, including those between the criminal and his hostages. The film has an absurdly happy ending that doesn't fit the overall tone. According to Wikipedia, the movie originally ended with the thief turning himself in and was redone after test audiences flipped out. Pity: a darker ending would have resonated better.

Nevertheless, this is easily the best "dysfunctional family" Christmas movie I've seen. It's funny, engaging, and dark. This actually falls right on the line between "highly recommended" and not. What the hell? I'll give it the label.
90's Comedy Crime Dark Comedy Erin Snyder Highly Recommended Movie