Rudolph and Frosty’s Christmas in July (1979) 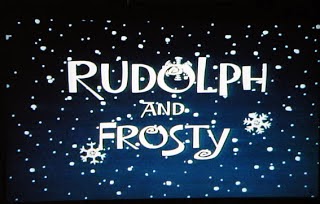 We just watched the epitome of stop-motion Christmas specials. I know, I know, you don’t believe me yet. Just give me a minute.

You know Rudolph, and Frosty, and Rudolph’s Shiny New Year, and Frosty’s Winter Wonderland, and Santa Claus is Coming to Town, and The Year Without a Santa Claus. But did you know that every last one of these takes place in a vast shared universe, which involves still more epic figures deserving of winter myth-making? No? Then you haven’t seen this one.

For me, Rudolph and Frosty's Christmas in July retroactively improves all the specials that came before it.

The premise is straightforward on the surface. An evil wizard who used to rule the Arctic wants to destroy Santa’s hold on winter, and to do so, he decides to take down Rudolph, using his friendship with Frosty as a lever against the young reindeer. 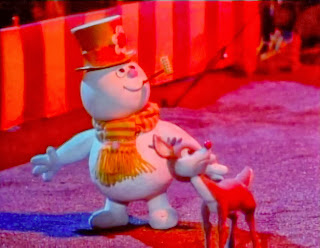 Oh, and we happen to establish the source and purpose of Rudolph’s magic, which I don’t want to spoil for you. What? You didn’t think Rudolph the Red-Nosed Reindeer was an epic fantasy hero? You thought wrong, my friend.

Sure, there are plenty of comedic scenes where the pacing starts to drag, more than a few plot holes, and a few of the minor villains fall rather flat. Some of the villainous moments are amazing, though, plus Ethel Merman stars in a supporting role, and the cameos and references to the earlier specials just keep coming. There are allusions to a much larger world of wintry magic, which we kept being intrigued by. I found the songs very sweet and mostly pretty good; they were written by Johnny Marks, the songwriter behind the original Rudolph song.

There’s also a huge amount of romance in this one. New minor characters Milton and Laine, Frosty and Crystal, Mr. and Mrs. Claus; the action keeps pausing to really let us feel the love in each couple, often in song.

This is a sequel that improves vastly for having seen the previous specials, but I think it would be a pretty entertaining watch for any fan of stop-motion and Christmas stories.

But for folks like us, fans of both Christmas and super-mega crossover events, this is downright awesome.
70's Christmas in July Comedy Fantasy Highly Recommended Lindsay Musical Special Stop Motion