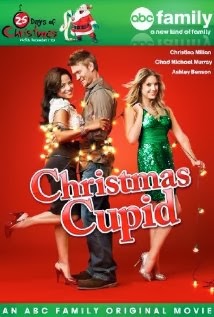 Wow, what a terrible movie. I mean, we knew it was almost certainly terrible going in, but it descended to unanticipated levels of terribleness.

It’s a TV movie from ABC Family. Do I need to say more?

Okay, here goes. A rising-star publicist by the unlikely name of Sloane faces a ridiculous riff on Christmas Carol when her recently deceased client shows up to fix her love life. It’s… almost cute in places, but the whole package is just horrible.

Characters who are supposed to be “awful” are immediately and obviously “awful” in the most stereotypical ways. Oh, and the main character used to date a cute doctor? Guess who she’ll end up with? The whole beginning is ridiculous as they try to establish a ludicrous status-quo. Sloane is dating the boss’ son and has a rivalry with an ex-boyfriend! Sloane sometimes doesn’t have time for everyone in her life because she has a busy job! Wow, sounds… normal. Sloane deals absurdly poorly with the whole haunted-by-the-ghost-of-your-client thing, in an unsympathetic and overdramatized way.

Once the story finally gets going it just gets worse and worse. The movie really tries to have it both ways, to say Sloane should succeed at her career, while condemning her for leaving her college boyfriend (doctor-guy) to pursue said career. As is often the case with romances, about halfway through I was furious that the character would consider dating any of these needy jerks who required her to put their egos above everything else in her life. This absolutely includes doctor-true-love-guy.

The character tries to stand up for herself, and hangs a bit of a lampshade on the idea that she shouldn’t be criticized for trading up a few times for a better boyfriend if that’s what she wanted and what was going to get her ahead, but of course in the morality of TV-movie-land, dumping a guy marks you as a “bad person”. Naughty, naughty. Coal for you.

There’s a particularly useless “Christmas future” scene in which the character WINS, but is in the hospital unconscious for no stated reason. By wins, I mean she marries the asshole she’s with at the beginning, and thereby gets the promotion she wants, and then they divorce, and she’s financially and professionally set. Probably sucked to live through, but good job! Now, all the movie had to do was establish that she was in the hospital because her new lifestyle caused her to become a party girl and overdose or something, but it’s not established. For all we know, she’s still going to die in three years from a congenital heart defect or something, because her being in the hospital is never tied to that future life.

The ending isn’t as terrible as it could be. Sloane wins in the end by doing her job competently and being nice to people who she had (to all appearances) been nice to in the past, breaking up with the asshole, getting together with the doctor and getting her friend to hang out with her lonely mom on Christmas. Aside from getting together with needy-doctor-guy, who she has no reason to believe she’s even compatible with anymore, it’s not too awful. She doesn’t abandon her career or anything. But there are so many dialogue references to nothing (mark of haphazard re-writes or re-cuts) and the whole thing is tedious. Plus the starlet-ghost becomes an angel or something, complete with ugly CG sparkles.

Please avoid this one for your blood pressure’s sake, or someone really will need a doctor.
2010 Comedy Dramedy Fantasy Lindsay Movie Sucks