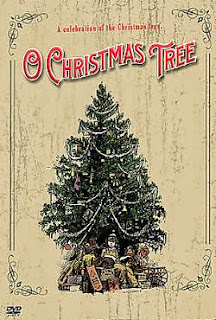 "O Christmas Tree" is a PBS documentary made in 2005 (or 2006 - it's seems to be a little difficult to get the date clarified). Lindsay and I found it at the local library and picked it up on a whim. The description claims it "traces the history of the Christmas through the ages - from its origins as a pagan symbol of fertility to a Christian symbol of rebirth." Technically, there is a section of the DVD devoted to that, but it's about as in depth and comprehensive as the sentence above: there's very little meat to that or anything else the documentary touches on. It's slightly less educational than the Frosty sequels with a fraction of the production values.

But that's not important. All you need to know is that this thing is the Plan 9 of Christmas documentaries. It's completely fucking hilarious.

First of all, it's narrated by Richard Karn. Don't bother with IMDB: he's Al from Home Improvement. And he just phones this in. Even relative to the effort he normally puts into his work: he's not trying here.

Despite the fact it's ostensibly a documentary, there's sort of a frame story where Al - I'm sorry, Richard... no. Screw that. Where Al is looking for the perfect Christmas tree on one of those cut-your-own-tree lots. This is mainly memorable for the scene where he picks one out. Let me paint the picture. It's snowing - in fact, there's snow everywhere - and Al finally comes across the tree he wants. The camera focuses on the tree, but doesn't show the bottom where it's supposedly growing. It is not the same kind of tree that's growing in the lot. I don't mean it's "slightly different" or anything - it's not remotely related. The one he found was a pine, and EVERY TREE ON THE LOT is a spruce. There's a shot of the tree shaking with saw sound effects added. And cut to Al walking up to the guy who owns the lot. It's sunny now, by the way, and there isn't a flake of snow on the ground.

Ah, the magic of film.

But this is nothing to the segments. Where to begin? There's the descendant of Charles Dickens who has a one-man play about his great-great grandfather. They showed a few cringe-inducing clips: it's pretty obvious he wouldn't be making a living doing this if it weren't for his heritage.

Did I mention there's music? They got Jon Walmsley (I guess he was on The Waltons or something) to write them a song called, "Christmas in America"*. I tried to find a clip of this, but - for some reason - there doesn't seem to be a record of this recording anywhere on the internet. Since I can't give you that, let me transcribe the lyrics in the chorus, so you can have some inkling of what you're missing out on:

My favorite segment was an interview with a couple of decorators who specialized in decking out wealthy clients' homes for the holidays. I really wish some of these clips were on Youtube - there's a section where they describe decorating a house that's haunted by a dead girl who once knocked over the tree they were working on. They tell this story in the same basic tone they used to describe working for the Hiltons. I wish I could do it justice - I almost fell out of my chair laughing.

I half expected Tim Allen to show up at the end, but he didn't. No, they went a more somber direction, with a conclusion starting with the passage, "After the experience of September 11th...."

This thing is awful, but it's absolutely watchable. Just invite some friends over, get hammered, and have fun.

*You might think you know this song: you don't. You're thinking of a different song called "Christmas in America." This one is even worse.
00's Documentary Erin Snyder Reality So Bad It's Good Special