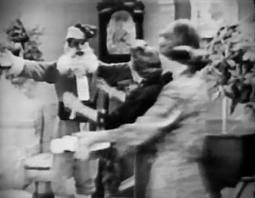 The George Burns and Gracie Allen Show was a 1950's sitcom. It seams to fall within fairly common parameters for the time: the comedy is primarily built around one character being shockingly oblivious to their surroundings and misinterpreting even the most common of phrases. Grace Allen is the proverbial screwball here, while her husband, George Burns, plays the straight man.

Despite being an old joke, the writing was surprisingly clever. On top of that, Burns and Allen were great on screen. In particular, George Burns had an astonishing amount of presence. He served as narrator in addition to star, and he commanded attention.

The plot of this episode was pretty straightforward: it revolved around Gracie's sister and her three children coming to visit for Christmas. Needless to say, hijinks ensue.

One of the more bizarre artifacts was product placement for Carnation Evaporated Milk. I say "product placement," but that's a misnomer: it was really a full commercial embedded in the episode itself.

Aside from a few sexist moments (well, it was the fifties), the episode holds up well enough. There were some legitimate laughs, and the actors clearly understood comedy far better than the vast majority of people working in the field today.
50's Comedy Episode Erin Snyder