Captain Gallant of the Foreign Legion: The Boy Who Found Christmas (1955) 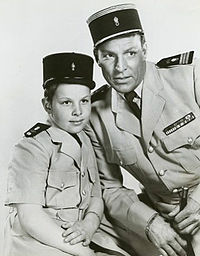 I mean, besides awful. It’s clearly awful. This show stars Buster Crabbe, a guy who would definitely take a different name if he were working in Hollywood today. And his son. And a comic character actor playing himself, sort of, which makes no sense, but nothing here makes sense. But let’s get back to the fact that there is no excuse for how terrible the kid is.

The kid is truly terrible; both at acting and in the story. The 3 minutes of plot in this 30 minute slog tell the story of how this brat, disappointed that the train with his christmas presents is stuck in a sandstorm, runs off to try to bring the packages himself. Alone. Through the desert.

The whole base turns out to look for the kid, and we get some really boring footage of the kid, I guess scared by being alone? I don’t know. I didn’t feel bad for him and I’m sorry he didn’t die alone in the desert for being a thoughtless moron. But instead, the adults catch up with him and forgive him for putting their lives at risk and then they have a campout and a terrible version of the Nativity story. And the kid gives each Legionnaire a shell, I guess to prove that he’s learned the spirit of giving? Or the spirit of placating the dangerous men who left their warm beds to haul him home by showing them how pathetic he is, maybe. I don’t know where he got all those shells on a desert base. And every exchange is shown. There’s like a dozen guys, so it’s a solid minute or two of “Merry Christmas [soldier]”, “Merry Christmas, kid”. I don’t know how anyone would want to watch this.

Also, apparently this show filmed on location, so I have no idea why it all looks like backlot and soundstage. Ugh. Just Ugh. Avoid this one, friends, it’s utter drivel.
50's Adventure Episode Lindsay Sucks War