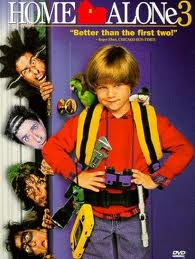 God, Home Alone 3 is a strange movie. Wikipedia sheds a little light on this thing: originally, they wanted Culkin back. He'd have been a teenager at this point, which would have explained the escalation with the villains. Obviously, they couldn't get him to return, so they wound up relaunching with a new character, who was about as old as Culkin in part one.

This led to the second most disorienting aspect of the movie (I'll get to the first in a minute): the discrepancy between the tone and the threat the villains supposedly represented. Along with Culkin, the robbers from the original two were gone this time around. In their place was a team of elite espionage professionals fighting to regain a computer chip they'd stolen from the US Air Force only to lose because they failed to exercise common sense when going through airport security. The implication seemed to be that their employer would have them killed if they failed to recover the object.

The computer chip inevitably made its way to a kid who was stuck at home sick with the chicken pox (not that he ever seemed sick at all). Oddly enough, he wasn't really "alone": his mother was staying with him, save when she would leave to run errands or get called into work for an hour or so. It was during these interludes that the "action" took place.

The criminals had traced the chip to the street, but weren't certain which house it was in. This quickly devolves into a cheap "Rear Window" scenario, where the kid winds up watching the criminals break into houses with his telescope, but no one believes him.

Eventually they determine which house he's in and go after him. Of course, by then he's had enough time to set up a familiar gauntlet of traps (many of which should be - but oddly aren't - lethal). The villains are armed with numerous firearms, which never grant them an advantage. Ultimately, these guys don't come anywhere near as close to winning as the bumbling thieves in Home Alone 1 and 2.

The role of the shovel man/bird lady is taken by a seemingly mean old woman across the street, who the main character saves in the end instead of vice versa (this is the closest thing to a twist the movie had going for it). There's no real tension, and nothing is remotely funny. In fact, the movie is somehow more unfunny than the first two, which is really saying something, since those weren't funny at all. I think this can be attributed to the kid's brother's pet parrot, which (in addition to being inexplicably sentient) was primarily used for what was supposed to be comic relief. The fact this wasn't funny at all should say a great deal about the movie.

I mentioned something extremely disorienting about the movie, and that's the kid's sister, who has a minor role in the movie. It took me a few minutes to place the actresses, but when I realized I was seeing a very young Scarlett Johansson, I think my head partially exploded. That anyone made it out of this thing with their career intact is kind of shocking.

I have to admit there's not a lot of a Christmas connection here: the movie takes place in the winter, but I don't recall any decorations or indication that it was all that close to the holidays. Still, it's part of this franchise, so I'm counting it.