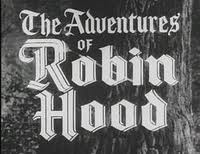 Ah yes, the olden days, when Christmas was a time of mingling between the upper and lower classes, and the lords and the peasants sang together unless the peasants were pissed off. Early Britain: a time of terribly inaccurate costume choices and horrible child acting.

This was a very odd program. It must be in the public domain or very cheap, because it’s on two of our collections of Classic TV Christmas episodes.

Like most of the programs I’ve seen from this time, there is little-to-no visible indication of snow, winter, or nighttime, even when it would seem that those things would be relevant. The “acting” is all around ridiculous and the production values are trying to be better than they are.

In any case, this story follows an annoying young peasant lad, Davie, who has a lilting soprano and an unnatural affection for a goose who he’s decided is his only friend. When the new local manor lord objects to Davie gathering mistletoe in his game preserve, Mildred the goose darts underfoot, and the lord is thrown from his horse. He seizes the goose as an assailant and condemns it (in court!) to be Christmas dinner. The goose’s defense attorney is none other than Friar Tuck, and he prevails upon Robin Hood to save the tasty pet from the table. Perhaps because of Christmas charity, or because that kid’s obnoxious fake-crying is putting everyone else off their food.

Robin comes up with a ludicrous plot to give the lord a lesson in charity through reverse psychology, culminating in pretending to beat a child bloody, and everyone is happy-ish by the end. It’s very strange, and not very interesting, except in a “really, someone thought this was a good idea?” sort of way.

The overacting is pretty amusing though, and if you like surreal glimpses of Hollywood past, this isn’t a terrible one.
50's Adventure Episode Lindsay So Bad It's Good