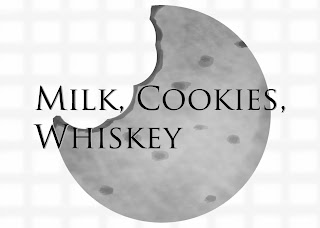 
How do you know the real one’s the real one? I mean, twenty-seven years of shopping malls, Christmas movies, candy commercials and the like: how do you know all those Santas are fake? The truth is, you just do. You see them there in their garish red suits and stupid hats, and at a glance you know they’re fake. Even kids know. They might lie about it, even to themselves, but no one’s ever really been taken in by the old farts they bring into department stores every winter. Because deep down, we all just know. We can tell the difference between a fake Santa and the real thing. I guess I never gave that much thought when all I’d ever seen were scores of the knock-offs.

But... Jesus. You walk into your living room middle of the night Christmas Eve and find a jolly fat-ass in a red suit and mittens washing down a plate of oatmeal chocolate-chip cookies with an open bottle of whiskey left over from your Christmas party, well... you’ve got to stop and reflect on that.

From the second I saw him, I knew this wasn’t some burglar or nutbar or anything like it. This was Santa-fucking-Claus in person. The legend, the myth. The real one.

A few points. You know those crappy, garish outfits I mentioned before? The ones the phonies wear? Yeah. Spot on. The hat, the coat; you name it. Same hideously bright red you see on TV, except turned up to eleven. There he was, the spirit of the season, and he looks like he just fell off a soda billboard.

But he smelled - he smelled like he crawled out of a sewer. I’m telling you, I’ve hit up some pretty awful bars in my time. I’ve come across some foul smelling sons-of-bitches, but this guy was something else. Let me put it this way: you ever stop and consider that Santa flies all over the world, speed of light or something, and the whole time he does it, it’s behind eight reindeer?

Me either. Until, like I said, I was standing there in front of him.

“Well. If it isn’t little Martin. All grown up. Quick gawking and sit down.” His voice was deep and a little slurred. I sat down, about as far from him as I could manage without being too obvious. “Where’s the wife, Marty?”

“Rough party?” He asked, sneering. He shook the bottle. “Not a lot left when I got to it. Little less now. Hope you don’t mind, but it was on the table.” He tapped the wooden coffee table which held the remnants of the cookies, as well as a full cup of milk. “If it’s on the table, I figure it’s fair game, eh?”

“I’ll tell you something, Martin. You look like you got something on your mind. Why don’t you share whatever’s bothering you with dear old Saint Nick?” He took another gulp of the whiskey. The bottle was almost empty now.

The fat man laughed again. “Just taking a break, Martin. Hope that isn’t too much to ask.”

“So’s your wife, Marty. And, unless these very experienced senses deceive me, you’ve had a few drinks tonight, too, haven’t you? And why the fuck not? It’s Christmas!”

“All right, but... you’re Santa Claus. What would you do if some kid saw you like this?”

Santa leaned towards me with a sarcastic smirk from cheek to rosy cheek. “This might surprise you. Might shock you even. But it turns out in the one-thousand plus years I’ve been delivering gifts to the world’s children, I have, in fact, had a drink or two in the past. And I have, in fact, been seen by some kid after the fact. And the world has, in fact, continued to turn on its goddamn axis. Kid sees me, I flash them a grin, slip them an extra toy and a candy cane, and send their ass to bed. No big deal.”

“But shouldn’t you, you know? Be better than that?”

“Oh. Ha. I get it. This is great. You’re pissed because I’m not what you hoped for. Don’t measure up to your expectations. That it Marty?”

“No, no. You’re right. I mean, I’m sorry I’m such a disappointment to you,” Santa said, awkwardly pointing through thick, black mittens. “Look, Marty. I’m sorry to keep shocking you like this, but you’re not exactly living up to expectations, either. Remember... remember when you were seven? Little airplane? Red? You remember that?”

“Good. Now, you remember why I got that for you? Do you?”

“I don’t know. Because I liked planes?”

Santa started laughing harder, deep belly-laughs. Not that ho-ho-ho shit from TV: this was the laugh you get in bars from angry truck drivers. “Liked airplanes? LIKED AIRPLANES?” The old man sure as hell wasn’t laughing anymore. “You were gonna be a pilot when you grew up! What the hell happened, Marty? You find your true calling repairing office equipment? You decide, hell with the sky; I’d rather wade up to my ass in toner? You think those toy planes make themselves? That thing took one of my elves three days to finish. Guess I should have just given you a ream of computer paper and saved him the headache.”

“Are you kidding me? I was a kid: I had no idea what being a pilot meant. I didn’t know what life meant or what I really wanted out of it.”

“Yeah. Tell me something. Now that you’re older and you got that all figured out, how’s it going for you. Really. On a scale of one to ten. How are you doing?”

“Bullshit. You’re out by five and at the bar by five-fifteen. How long you really expect to have that family you’re so proud of, things stay like this?”

“What’s that supposed to mean?” I asked.

“You know what it means.”

This son of a bitch was out of line. “Fuck you. I’ve never cheated on Lauren. Never.”

Santa smiled. It was a big smile. Mean. “Guess that makes you a real saint, right? You’ve been true to your wife. Never even thought about it, did you?” Then he reached into his pocket and pulled out a notepad. He flipped it open. “Certainly not the kind of guy who’d approach a blond grad student at Morrin’s Pub on November 16 at eight forty-seven, after telling his wife--” he flipped back a page-- “He’d be out looking for a spaceship for his kid.”

He gestured to himself and rolled his eyes. “Who the hell do you think you’re talking to? I know shit.”

“Right,” I said, apologetically. “Right. For what it’s worth, nothing happened.”

He closed his notepad. “Yeah. Like I said, I know.” He finished the bottle and set the empty bottle down. Then stood up and stretched. Then he lifted his sack up from behind the couch and opened it. He fished around and pulled out a box wrapped in red and green paper.

“It’s a toy rocket-ship, Marty. For your kid. I must have forgotten the card. Why don’t you fill one out for me?”

“Whatever. Mind if I hit up your bathroom before I head out? Oh, and don’t worry about me driving in my condition. Deer do all the work, anyway.”

He was gone after that. I had a hell of a time trying to explain the bathroom to Lauren the next morning - it smelled for months in there. But... I think I’m a better person now. I’m not perfect. I still go out after work sometimes, but not all the time. And I sure as hell never approached anyone again. Even if I wanted to, I get it now. I get the real meaning of Christmas. It’s a reminder: that he’s always watching.

That was five years ago to the day. And every Christmas Eve since, I’ve done what I’m doing tonight: getting the presents down early and getting to bed before ten. Because I never want to see that old bastard again, long as I live, no matter how much I owe him.

But, right before heading up, I always do one extra thing. I leave out a bottle of Scotch beside the milk and cookies, because I really do owe him a lot. And I wonder sometimes whether he’s doing what he really wanted to do in life. I wonder if maybe he wouldn’t have been happier with a family of his own, or - hell - maybe a job fixing printers.

Shit, I don’t know. But I know he likes a drink from time to time. And it is Christmas, after all.
Erin Snyder Fiction