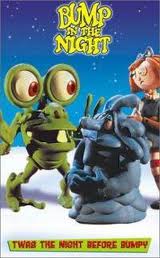 I can't remember ever hearing of "Bump in the Night," but Lindsay swears it was popular in its day. It was a stop motion series from the mid-90's about a monster named Bumpy and his friends. We wound up getting the hour-long Christmas special on the "Christmas Cartoon Collection" DVD Lindsay found for six bucks at Toys R Us.

Calling this bizarre is an understatement: it's one of the strangest Christmas specials I've ever seen... and that's saying something. Bumpy sets out on a quest to steal Santa's sack of gifts from the North Pole. On the way he manipulates others into assisting him by promising them presents.

The animation is impressive. It's warped and twisted, as is the writing. The jokes are farther apart than I'd have liked, but most are clever (some were exceptionally so). Ultimately, we're left with something mixed. It has an amazing tone thanks to a shockingly dark sense of humor, but the pace is way too slow.

The third act pays off, however, when Bumpy reaches the North Pole. I've seen a lot - A LOT - of different interpretations of Santa's keep: this is absolutely the most fearless. Imagine a bleak militaristic installation guarded by armed snowmen being overseen by sadistic elves: I can't imagine kids watching this and not being traumatized.

The resolution strikes a satisfying middle ground between the requirements of a mainstream audience and the twisted tone of the world.

I really wish this had been shorter or at least better paced. It occupies an almost unique spot on the spectrum of holiday specials, but it's a little too slow to recommend to a wide audience. But if you're a big fan of the darker side of Christmas, you've got to check this out. It doesn't get much stranger than this.
90's Comedy Dark Comedy Erin Snyder Horror Special Stop Motion