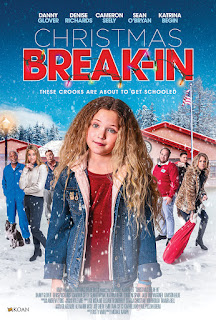 On some level, it's weird there aren't more Home Alone homages. We've seen a few - Unaccompanied Minors was solid, and (apologies in advance for even spoiling there's a connection) Better Watch Out is easily one of the best Christmas horror movies in existence. But given how large a footprint Home Alone left on the zeitgeist, it's weird there aren't more. I mean, think of how many holiday family comedies National Lampoon's Christmas Vacation spawned.

That brings us to Christmas Break-In, a movie that reuses Home Alone's formula to a degree that's almost shocking. The line between homage and knock-off is of course subjective, but this really strains credibility. It certainly wants to be an homage - I spotted numerous shots and moments I'm pretty sure were intended as references - but these felt more like the movie was flaunting its theft of ideas, rather than complimenting the source. That said, if you told me this was originally intended to be part of that franchise, I'd have to believe you (and only partially because there's literally no information about the production of this thing readily accessible).

Christmas Break-In is, I assume, a made-for-TV movie. That's how it's categorized on IMDB, anyway - it doesn't have a Wikipedia page, so I'd have to do actual research to try and confirm that. And, in case you hadn't already picked up on the hint, this thing ain't worth the effort. I'm honestly not even sure the "2019" is accurate - I'm seeing it alternatively credited to 2018 and 2019. I guess neither year wants to claim responsibility.

The plot centers around a conflict between a nine-year-old girl, Izzy, and three thieves who steal two bags full of coins from a Salvation Army store and get lost trying to escape to Acapulco. For the record, that last sentence is funnier synopsized than in context. It's actually not clear whether robbing the Salvation Army is even intended as a joke - it should be: logically, they'd get a few thousand bucks at most. The movie plays that straight though, leaning on the idea that the theft is worse because they're stealing from the poor at Christmas.

The thieves are more bumbling than threatening. One is actually presented as a genuinely kind-hearted person who's been pulled into a life of crime by his sister and her boyfriend. The sister is actually the mastermind and the cruelest of the three, so... kudos for having two of the three main roles fall to female characters, I guess?

Before I talk about Ray, the movie's third major character, let's take a minute and discuss Izzy, the central protagonist. She's an elementary school student planning to buy her own guitar at a Christmas sale after the last day of school before break, but she's worried her parents will forget to take her -they're absent-minded. More accurately, they're neglectful to the point of criminality. The Home Alone movies went through a lot of trouble establishing his parents were mostly just unlucky: this just makes them horrible people and tries to play it for laughs.

She also has an older brother she fights with, despite the fact he's genuinely kind to her and clearly loves her. I feel like there was supposed to be a moment where Izzy realizes she wasn't a good sister, and that just got cut or something. The first act actually set up quite a few hints Izzy might be flawed, only to abandon them immediately. She's fixated on that guitar to the point of obsession, and she ignores her teacher. These felt like they were establishing moments of growth, but there were no payoffs, save for a scene where she apologizes to Ray for lying to him about her parents coming to get her (and she only told this lie so he wouldn't miss a gig).

That brings us back to Ray, an elderly black school janitor who's always ready with words of wisdom and guidance. He spent some time in prison, where he learned to play the guitar, and he's formed an unlikely friendship with Izzy.

Incidentally, Ray is played by Danny Glover, who I sincerely hope was well compensated for appearing in this dreck. As a side note, most of the movie's cast have notable connections with the holidays: Glover through Lethal Weapon; Izzy is played by Cameron Seely who voiced Cindy-Lou Who in The Grinch; Denise Richards plays Izzy's mom and Christmas Jones in The World Is Not Enough (she shows up in Love Actually, too, so I guess Christmas roles really do... never mind). I have no idea if any of this casting was intended as some sort of meta-joke, or if it just worked out like that. Either way, it's again funnier than anything in the movie.

Back to Christmas Break-In. The plot of course sticks the three thieves in Izzy's school when she's the last one there. When Ray discovers her parents are stuck in a blizzard (oh, yeah: there's a blizzard), he returns to get her, but winds up captured by the thieves. Izzy overhears two of the thieves plotting to "get rid" of Ray and decides she needs to act. So she of course sets up a bunch of traps and tricks to mess with them.

She's actually quite a bit less violent than Kevin McCallister was in her predicament. Aside from a tennis ball launcher and a single trip rope, she mainly just convinces them there's a ghost haunting the school. She frightens one until he passes out, then locks the mastermind in a broom closet by overpowering her with the help of Ray's dog (it makes less sense in context, so just go with it). She also hides their money.

All this gives Ray time to turn the kindhearted thief to his side, not that it helps yet. First, the mastermind escapes and threatens to kill Ray if Izzy doesn't return their stolen money. Izzy agrees, but scares her with Ray's (small and unimposing) dog, which buys her time to escape. Not that she seems to have needed to escape: the thieves never really act threatening towards Izzy, even when they've captured her.

At any rate, Ray and the not-evil thief capture the third thief and meet up with Izzy. The mastermind is about to escape, but by that time Package-Delivery Santa shows up with Izzy's parents and stops her from escaping. Then the mastermind gets knocked down when Izzy's brother appears on a snowboard being pulled by a drone.

Oh, right. I was probably supposed to mention the B-plots.

Honestly, there's not much there. Throughout the movie, we constantly cut back to Izzy's parents, full of regret, trying to reach their daughter in the blizzard. They get stuck in a snowbank, almost freeze to death, do a bunch of property damage trying to steal a snowmobile, then eventually hop a ride in a package delivery truck that's being driven by a guy the movie strongly implies is Santa Claus. Meanwhile, her brother... ugh. There's a snowboard, some friends, a drone, a love interest, and none of it matters or makes any sense, so who the hell cares?

The movie ends with the bad guys getting arrested. The redeemed thief gets arrested, too, but Ray assures him he knows the DA and can get the charges dropped. He also offers him a job as his assistant janitor, which brings up a few thousand more questions the movie doesn't answer. Fortunately, I didn't want them answered, so that works for me.

There's also a brief sequence showing Izzy explain what just happened to her astonished (but believing) parents. This of course deviates from the Home Alone movies, in which the parental figures never discover the truth. And, if you ever wanted to see why the Home Alone movies went this route, try watching this crap without throwing up. It is painful.

Anyway, Izzy gets her parents to invite Ray to spend Christmas with them, and he winds up giving her a prized guitar that holds too many difficult memories for him to play, anyway. The characters are all happy, I'm miserable, and the movie ends.

So, yeah, this sucks. The jokes rarely land, the emotional arcs are boring, and the premise is clearly photocopied from a classic. And when I say its failures elevate the choices made in Home Alone by showing how things could have gone wrong, keep in mind I DO NOT EVEN LIKE HOME ALONE.

For what it's worth, Danny Glover does good work (I mean, of course he does: he's Danny Glover), but it's wasted on an offensively bad script and a clichéd character type. This movie was a waste of Glover's time, and a waste of yours if you sit through it.

It's currently streaming on Netflix, if you'd like to give it a chance. Go on. I dare you.