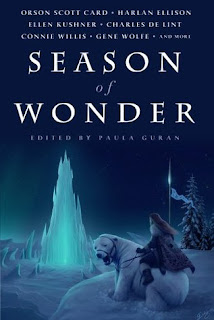 I'm always looking for fantasy and sci-fi Christmas content, so I'm stupefied that this short story collection escaped my notice until now.

To be clear, I almost didn't read it this year either - my local library doesn't have it, and I am reluctant to pay money for any book with Orson Scott Card's name prominently on the cover, just on principle. The rest of the book is pretty good, though.

Like other holiday short story collections I've reviewed, the introductions range from boring to misleading to outright undermining my enjoyment of the stories, so I tried to skip them when I could.

Reactions to individual stories follow. My favorites are starred.

The Best Christmas Ever by James Patrick Kelly

This atmospheric/bleak dystopian story is fine, if a bit heavy to open with. The last humans are being cared for by some sort of artificial being which is never actually explained. The nature of the technology isn't the point, but the vagueness still bothered me.

Go Toward the Light by Harlan Ellison

Why is this a genre story? It was an okay, if meandering, story about a woman in a mining town on the edge of a war, but the fantasy elements were too confusing, felt purposeless, and didn't enhance the story.

A poignant little piece of magical realism about a person who lost a friend. Very much in this author's style.

*The Nutcracker Coup by Janet Kagan

One of the best by a lot. This is a sci-fi tale about diplomats on an alien world sharing holiday traditions and the unintended consequences thereof. It was a ton of fun, a lot of content well packed into a short form without feeling rushed or underexplained.

How the Bishop Sailed to Inniskeen by Gene Wolfe

I could barely follow this horror/ghost story, and I don't know what the point was.

I'm not sure I liked this, but I think it's well done. Creepy surreal combination of sex and death and references to children's literature.

My enjoyment of this story suffered significantly from the timing. First, because it's set in a future after the fall of our civilization. I had to stop reading a few times because of elements that were probably intended when written to be troubling... but not horrifying and nightmare-inducing. Second, because I just re-read Spin by this author, and the stories have the exact same core: a normal/good narrator caught in the orbit of (perceived) greatness. The ending of it was pretty good when I finally got there.

A not-bad spin on Christmas Carol and time travel, but not exceptional. One of those stories that's better on reflection than while you're reading.

The Christmas Witch by M. Rickert

This story follows a young girl who moves to a spooky town where the children secretly collect bones and the adults could be witches. It's extremely evocative, but I'm left not quite knowing the point.

This trying-too-hard story about alien Wise Men told from a demon's perspective might almost be decent if it wasn't so weirdly Mormon.

This is a super cute paranormal story about a werewolf and vampire who fight evil; surprisingly wholesome for the subgenre.

Oh, I really liked this bit of magical realism. It follows an ambiguously gendered person who can talk to inanimate things and an unexpected holiday friendship. Lovely character work, subtle and poignant.

A Christmas Story by Sarban

This story is the oldest in the collection, but feels like a pastiche of even older works. It's a bit roundabout, a tale within a tale about a pair of lost Russians coming upon a mysterious animal in the frozen north.

This story that mashes up It's a Wonderful Life with quantum multiple worlds has a better sci-fi angel twist than others I've seen. However, the cute gimmick gets old fast. I had to double-check the date on this one (2008, so semi-recent) because there were some asides in the middle that felt modern but the ending felt unpleasantly and strangely dated when the mysterious woman who's been talking to the main character and explaining everything decides to randomly have sex with him.

I like this one that follows a young boy who witnesses something creepy stalking the edge of his family's vacation and (spoiler) features Santa as humanity's defender against the fae.

The Winter Solstice by Von Jocks

This one is about a Wiccan who stumbles into a scary situation involving Solstice magic. Well done, although the ending is a bit lackluster.

This was the best story in the collection of Willis' fiction that I read a few years back, and it's still a lot of fun. Pod people attack for the holidays.

Overall: Nothing terrible, a few really good stories. That's not bad for a collection.