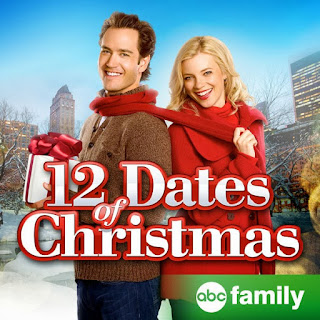 I find this movie somewhat perplexing, and not because the premise is a knockoff of Groundhog Day, complete with unexplained temporal paradox. What's weird about this campy made-for-TV romcom is... it's kind of good.
Don't get too excited - it's only mostly kind of good; there's still quite a bit that just isn't. Either someone turned in a screenplay too good for the format, and a third got rewritten into schlock, or someone rewrote two-thirds of a schlocky screenplay and forgot to fix the rest. I have no clue which. Granted, that's a hell of a lot better than what you'd expect for an ABC Family Christmas flick.
The plot centers on Kate, a woman pining over her ex and planning to try and reconnect for the holidays. Meanwhile, her stepmother has set her up on a blind date, and Kate feels obligated to put in a brief appearance. Before we follow her through her first iteration of interactions with a random cast of people, she briefly faints in a department store, setting up the respawn point for the rest of the movie.
Blind date Mark 1 goes predictably badly, mainly because she bails after a few minutes to meet up with her ex, who - surprise, surprise - is with his new girlfriend (actually, it's about to be his new fiancé, but that's not revealed until a later cycle). Kate doesn't have much better luck with the rest of her friends or family, and she's feeling incredibly depressed at midnight. But then time reverses, and she winds up back on the department store floor, about to go through round two.
I won't take you through all twelve, but suffice to say there are multiple side characters in need of help, she gradually falls in love with her blind date, and she learns a ton of new skills.
Actually, the new skill thing is a little awkward. As mentioned at the start, this movie "borrows" liberally from Groundhog Day, and that includes picking up new talents. But Phil had decades; Kate literally only has 12 days. It's a weird disconnect that makes me wonder if there might have been an earlier script where this played out over more iterations.
It's also notable that Kate never picks up on the 12 Days of Christmas motif. As far as she can tell, she's stuck forever. The audience is let in on the joke thanks to the title and a series of background and foreground elements nodding to the song (see if you can spot them all).
While the movie adheres a little too closely to Groundhog Day's rules and logic, it does manage to avoid quite a few clichés associated with made-for-TV Christmas romcoms, starting with the fact it isn't exclusively focused on the romance. Starting a relationship with a new guy is certainly a big part of the movie, but she also improves existing relationships with her ex, her best friend, her stepmother, and her neighbor, and she forges several new friendships.
Oh, and I should also note she does not give up her job, move back to any small town, change her mind about having a family, or learn to believe in love. It's a goddamn Christmas miracle.
For the most part, the writing is solid. It doesn't transcend its genre or anything, but it's funny, sweet, and generally emotionally honest. And in case you didn't notice there were multiple qualifiers in the last two sentences, allow me to reassure you that there are indeed exceptions. Quite a few, in fact. In the middle of a movie where the main character believably reacts to a time loop, a grown woman whines about her father's new wife being a "replacement" for her late mother. Likewise, there are a few moments where characters muse a little too openly about fate in a way that's neither natural nor engaging.
But setting that aside, the writing is - dare I say - pretty clever. I like that she initially interprets the time loop as an opportunity to get back together with her ex, rather than start anew. And while the 12 Days motif is a little hokey, it makes for a good visual reminder of where we are in meta-time.
But before I go talking this up too much, let's back up and talk production values. While the writing is far better than I expect from movies like this, the look and feel of the thing is right around par. It's got that overly clean soundstage look you expect from made-for-TV productions.
That said, the cast is good overall. There's definitely a disconnect between the way they're written and how they act (sorry - I lived in New York too long to buy that these people are from the city), but they're likable. In other words, while they're not believable as New Yorkers, they are more believable as people than characters in this genre usually are.
I should also mention I felt the last iteration of the loop felt rushed. It brought too many threads together, including a few we'd barely interacted with. But... hey... what I'm really saying is I finished this movie, and I'm complaining it was too short. What do you call the opposite of a backhanded compliment?
This wasn't a great movie in any sense of the word, but it was solid and I honestly enjoyed watching it. I can't quite justify an unconditional recommendation, but if you're looking for a cheesy Christmas romantic comedy, this is one of the better options out there. In my opinion, there are only a handful of Christmas romcoms released theatrically in the last three decades that can hold a candle to this cheaply made TV movie. (I'll spell it out: this is better than "While You Were Sleeping" or "Sleepless in Seattle").
Also, the love interest is played by Benjamin Ayres (a.k.a.: Zach from "Saved by the Bell"). It might be worth watching for that alone.
2011 Comedy Erin Snyder Fantasy Movie Romance Science Fiction