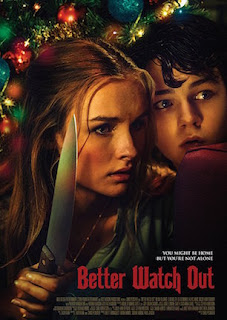 I found Better Watch Out on a list of well-reviewed Christmas movies posted by Rotten Tomatoes and added it to my Netflix queue. Turns out, it's well reviewed because it's a good (arguably great) horror flick. Unfortunately, the bulk of what makes it great are the movie's twists, which I really can't avoid discussing.

So. If you're a fan of horror - particularly the psychological variety - you might want to stop reading until you've had a chance to track this one down. In particular, if you love Christmas movies AND horror, seriously: STOP READING NOW.

Last warning, and this one's going at the end for a reason. If you're a fan of the Home Alone series who also enjoys horror movies, for the love of God, I hope you never made it to this sentence, because I just gave away way more than I wanted to.

For the rest of you, here's a synopsis. Ashley is a seventeen-year-old babysitter looking after Luke, a twelve (almost thirteen) year-old boy. After his parents leave, Luke starts misbehaving in a misguided attempt to appear more mature. He makes a few passes at Ashley, which are of course immediately rejected.

That's when the horror stuff starts.

The next few minutes play out like fairly generic home invasion fare. Only as things escalate, it becomes pretty obvious something's off. The scares are a little too by-the-numbers; the unseen stalker(s) are a little too mechanical. By the time Ashley realizes this is all being orchestrated by Luke, it's not at all a surprise to the audience (nor is it supposed to be).

The rest of the movie delves deeper and deeper into Luke's escalating psychological games. The movie never uses the term "sociopath," but it's pretty clear that's what we're dealing with. And if you're thinking this is sounding more and more like The Good Son, you're definitely on the right track. But you're not alone - the main character references Home Alone more than once. A few of his schemes were directly inspired by it, in fact.

In a nutshell, Better Watch Out is a psychological horror homage to Home Alone. Arguably, "deconstruction" would be a better description than "homage." This is a dark, suspenseful, disturbing movie that borrows liberally from the "classic" comedy. Like in The Good Son, the kid's an outright monster. There's nothing sympathetic or lovable about Luke - he's evil incarnate. But strip away his surroundings, and you'll find he's got a lot in common with Kevin McCallister. Even his final motivation feels like a callback.

Impressively, despite the dark themes and twists, the movie manages to maintain a tone reminiscent of the same source material. There's a sort of colorful, larger-than-life look to everything that makes it feel like it's playing out in the same world as Home Alone, at least until physics intervene.

All of this makes for a difficult balancing act. Better Watch Out needs us invested in Luke's twisted psyche, but it can't cross a line and sympathize with him. At his core, Luke is a self-obsessed, privileged, misogynistic sociopath: it's kind of important the movie remembers this. And for the most part, it does. But there are a few moments where it drifts dangerously close to siding with him, and the comedic mid-credits stinger doesn't help matters. The note the movie ends on is a far more appropriate one than the "and the game continues" stinger.

Still, Better Watch Out does a good job building both an interesting heroine in Ashley and a frightening monster in Luke. It finds a good balance between horror and comedy that leans more towards the former without abandoning its sense of humor.

I've said before that horror isn't really my genre, and this doesn't change that. I enjoyed this but didn't love it. However, if this is a genre you're more invested in, you might want to check it out (though it would have been better if you'd done so before reading this far, unfortunately). It's absolutely on the short list of best Christmas horror movies I've seen to date, and if you filter out the comedies, adventures, and anthologies, it might be in contention for the top spot.
2016 Erin Snyder Highly Recommended Horror