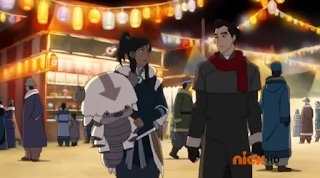 I'll try and keep the context brief, because... there's a lot.

The Legend of Korra is an animated series that's a sequel to Avatar: The Last Airbender, which is... it's great. Like, astonishingly great. If you've never seen The Last Airbender, go watch it now (just don't bother with the abysmal live-action movie). It's a fantasy inspired heavily by martial arts movies and the films of Miyazaki. The series is funny, dramatic, and beautiful.

Korra is set decades after The Last Airbender, when the main characters of that show are either old or, in some cases, dead (Korra herself is the reincarnation of the titular character of the preceding show). Technology has evolved, allowing the showrunners to remake the world with a steampunk aesthetic.

As a whole, The Legend of Korra doesn't live up to its predecessor. To be fair, virtually nothing compares with The Last Airbender, so that's less an indictment of Korra than an acknowledgment of how good Airbender was. While Korra is no less ambitious, the tone just doesn't come together with anywhere near the same level of cohesion. The series changes course numerous times, including a fairly jarring tonal shift from the first to second seasons (probably for the best - the first season was a bit too dark for my tastes). It's still worth seeing for the world, animation, and characters, but it's not in the same league (but again, virtually nothing is).

That brings us to the somewhat surprising "Christmas" two-parter that kicks off season two. Note the quotation marks: this obviously isn't a Christmas episode, since it takes place on a world without, well, Christmas. But it is explicitly a winter solstice episode, and we've been pretty clear that those count.

In fact, the subject of fictional solstice holidays in fantasy is something of an obsession for both me and Lindsay, so this certainly sparked our interest when we realized when it was set.

The plot of these episodes is somewhat sparse, particularly the first "chapter." Half of that episode is spent reconnecting with the main characters of season one and setting up new characters, including several who will be significant for the rest of the series. Along with an eccentric inventor and Korra's mentor's siblings, we also meet Korra's extended family, including her father, Tonraq, and his brother Unalaq, who looks and sounds like the season villain he turns into.

But I'm getting ahead of myself. Korra and her friends are visiting the Southern Water Tribe during a solstice festival. Also visiting is her uncle, Unalaq, the chief of the Northern Water Tribe, who's present ostensibly to help them reconnect spiritually with their traditions. He also makes it clear he doesn't think Korra's current teacher, Tenzin, is doing a good enough job instructing Korra on the Spirit World, which is significant since there have been a number of spirit attacks recently.

Naturally, there's a spirit attack, and none of the main characters are able to beat it in a fight. Eventually, Unalaq shows up and instead pacifies the spirit, resolving the conflict peacefully and convincing Korra there's a great deal he can teach her. Against her father's wishes, she fires Tenzin and agrees to take Unalaq as her new teacher.

That brings us to Chapter Two, The Southern Lights, which is largely concerned with Korra (along with a good portion of the cast) going on a journey to the South Pole to fix her people's connection to the Spirit World. Unalaq tells her that she needs to reopen an ancient portal to the Spirit World on the Winter Solstice, so they can restore balance and stop the spirits from attacking.

This seems like a good time for an aside acknowledging I'm not 100% sure whether "Winter Solstice" is relative to the northern or southern hemisphere of this world. They're in the southern hemisphere, so this may technically be the summer solstice relative to the north, which would only be relevant in terms of whether or not it's analogous to Christmas. But I'm going to assume they used the term "winter solstice" to intentionally draw that connection, and I'm not going to think too hard about it (the same way I'll look the other way around night and day still occurring at the South Pole during either solstice).

Back to the plot. After sighting some more dark spirits, Korra gets some backstory about her father, who was banished from the Northern Water Tribe after destroying an ancient forest at the North Pole. She's angry he didn't tell her before, but they all push ahead into the Ever Storm, which...

Look, these episodes are about 60% exposition, so let's just say there's a magical storm where they get attacked by more dark spirits. Korra's father argues it's too dangerous to continue, but Korra sides with Unalaq and sends her father back alone. In the process, her relationship with her boyfriend is strained when she believes he's taking her father's side.

They eventually reach a frozen forest, more or less identical to the one from her father's story. She goes on alone while everyone else waits at the edge. She fights more dark spirits, finds a glowing ball in some ice, and eventually gets it open, lighting up the southern sky (see episode title). Everyone returns to the Southern Water Tribe to discover a fleet of warships from the Northern Water Tribe have arrived. Unalaq puts a positive spin on this, but Korra's shaken by the development.

Meanwhile, Tenzin's family has spent the episode at the Southern Air Temple, and his daughter, Jinora, has a spiritual encounter which sets up a bunch of stuff that gets paid off later in the season.

It's honestly difficult to discuss these episodes in isolation, at all: they're almost entirely devoted to world-building and setup for everything that follows. There are enough comedic moments, cool visuals, and intriguing new characters to make them interesting, but there's not a great deal to say about the story. These really feel like the first two chapters of a longer story, and... well... that's how they're titled, so there's no sense complaining about it.

Back to the solstice connection. This is, of course, playing off the trope of the barrier between the mortal and spiritual world being weakest at this time of year (Dickens would approve). You could draw some interesting parallels between this and Hearth's Warming Eve from My Little Pony: Friendship is Magic (the dark spirits and the Windigos behave fairly similarly), and other animated holiday specials set in fantasy worlds (seriously: this is something Lindsay and I spend a lot of time thinking about).

That said, there's something somewhat unique about these episodes. In every other example I can think of, the solstice holiday serves as a sympathetic magic ritual to either drive back the winter or perform some other essential task. That wasn't the case in Korra - there were magical forces at play, but those forces were only nominally connected to the festival.

I'm not sure this would interest anyone else alive, but it makes a fascinating counter-example to the trend.

As for the episodes, season, and series, I'll reiterate what I said at the start. Legend of Korra isn't anywhere near as satisfying a show as Last Airbender, but it's enjoyable in its own right. I'm not sure I'd recommend it to everyone, but if you like the aesthetic, it's worth seeing. Still, watch Avatar: the Last Airbender first, both because you'll want the background and because it's an amazing accomplishment in broadcast animation.