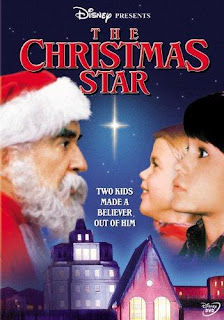 Before we get into this, I want to start with a spoiler warning of sorts. Sometimes we come across a movie that's surprisingly good for reasons that are best viewed in the context of the movie.

This is not one of those times.

The Christmas Star isn't good. At all. It's badly paced, dull, and tedious for the vast majority of its runtime.

See, to finish that sentence, I'd need to go into the finer philosophical details of the phrase "so bad it's good," which you'll note is being used as a label for this review. While most movies earning that title win it through a constant level of entertaining badness, The Christmas Star takes a different tack, one I'll discuss later in this review.

In the meantime, allow me to propose a drinking game. If you were to sit down to watch this with a bottle of your favorite holiday spirit and take a shot anytime you became bored out of your goddamn mind, you'd be in a *perfect* state to fully enjoy the payoff when it finally arrived.

Now then, on to the plot!

The movie stars Ed Asner as "Horace McNickle," a con man with six months left on his sentence. At the beginning of the movie, a fellow inmate shares some foreshadowing a story about "The Christmas Star," a magical star connected to the birth of Christ that magically appears to people who have been selfless or something.

Horace is planning to serve out the remainder of his sentence then collect the loot from the heist that got him arrested, but that plan hits a snag - the money's hidden in a prop throne used by a department store Santa, and the props are about to be sold.

While he's stewing on this, a mission visits the prison to hand out early gifts and food. Among the visitors is a priest dressed as Santa Claus. White-bearded Horace naturally steals the suit and walks out the prison door. He heads into town, where he meets the movie's other protagonist, a kid whose parents are about to lose their home because the landlord is selling the building. Also of note is the son of said landlord, a young troublemaker with a good heart who takes in a stray dog.

Okay, technically, he tries to take in the stray dog, gets stopped by his father, then secretly gives the dog to the other kid, knowing his parents will allow it, but by the time it matters he takes the dog back for Christmas Eve, and...

Why am I bothering? Pretend he takes in the dog himself, because that would have streamlined this convoluted mess.

At any rate, the kid whose parents aren't cliché villains assumes Horace, still dressed in his Santa suit, is the real deal, and Horace of course encourages this to get food and help recovering the money. He feeds the kid and his sister a story about a fake Santa stealing the cash he needs to buy presents and hiding it. This kicks off a heist subplot where he and the kids come up with a plan, enlist aid, and recover the bag of cash.

Well, most of the kids. The aforementioned son of the landlord has a change of heart when the dog dies. See, Horace basically promised the kids whatever they want for Christmas in exchange for their help, and in this kid's case, that included help for his sick pet. Now that the dog's dead, he concludes Santa's a fraud and goes to the cops. They're too late to stop him, though - by the time they arrive, the kids have already grabbed the loot and are on the way to meet up with Horace.

There's a tearful goodbye establishing that Horace is having second thoughts about taking advantage of the kids' naivete, but he continues on alone to the train tracks, where he's planning to skip town. The train stops, but more ominously than expected.

Like, really ominous, in a noticeable way. He's just supposed to be slipping onto a freight train, but it pulls up beside him, and a door slides open. He climbs aboard an empty passenger car, and...

Now we seem to be in a horror movie about a haunted ghost train bound for hell.

At least that's what the UNDEAD SKELETAL SPECTRE OF HIS SUDDENLY REVEALED TO BE DEAD PARTNER implies. Yeah, they're going full Marley here. They skip the three ghosts, but the basic outline is the same. Meanwhile, the imagery is surreal. Windows look out on impossible locations in other times - first a snowy forest, then a desert with three figures on camels - and show sequences from earlier in the movie and the future the kids and their families face. Horace flees in terror, running through car after car until he leaps out of the back onto the tracks, before watching the ghastly apparition vanish.

If you're wondering where the hell all that came from, I've got no clue. Nothing in the movie established a tone remotely like these five minutes. Think Magnolia for a sense of how jarring this shift felt.

I don't want to oversell this segment - it's way better than the rest of the film, but the production values are still lacking, particularly around the effects and props. But the set is atmospheric, and the actors really sell the Scrooge/Marley bit. In fact, I'd go so far as to say it's one of the better re-imaginings of that interaction I've seen on film.

The movie doesn't entirely revert to its previous tone, either. After a brief sequence with one of the kids, the movie cuts to a police car passing in front of the building while the camera pans up to reveal Horace in a Santa suit looking down from the roof. While watching this, I cracked a joke about Batman... then the next scene made it feel like less of a joke. In it, Horace confronts the landlord in his apartment, and again it's shot like a horror movie, but this time the supernatural force is Santa, eerily framed in green light. And... it's incredible? The Batman comparison isn't a stretch - this is honestly how he's supposed to appear to villains: terrifying, larger than life, and mythic. Forget irony or "so bad it's good" - this scene is just a minute or so long, but it's legitimately great. If the rest of the movie had been a tenth as inspired, you'd be reading a very different review right now.

After this, we cut to the kid who believed in Santa looking out the window and seeing Horace, who waves him down. Horace tries to tell him the truth, but before he can finish the cops show up and arrest him. While the cops drive him away, a magical light comes down from the heavens, because... you know... Christmas star. It looks ridiculously hokey, but whatever.

Next we get a bunch of resolution. Along with scaring the landlord into being a better dad to his son, Horace also used the money to buy the property and arranged to have the deeds to the apartments transferred to the tenants on Christmas. And he left the kids a new puppy. And he left a dress for his partner's abandoned wife, who I didn't mention before because this synopsis already feels too long. And the detective I also hadn't mentioned who was chasing Horace makes it home to spend Christmas with his family, resolving a running gag. And Horace returns to prison, a changed man who now understands the spirit of Christmas.

To sum up, around 95% of the movie is obnoxious, boring schlock, but that kind of enhances the trippy scenes towards the end that are actually interesting. The horror and superhero stuff is actually good, assuming you can make it that far. Alternatively, if you're just curious, boot up Disney+ and skip ahead to the hour-and-ten-minute mark to catch the interesting part. Again, it's kind of better if you're watching it in context without expecting it, but that ship's already sailed if you read this far in the review (and it's probably not worth it if I'm being entirely honest).

I do think it's worth noting the outline of this movie had a lot of promise they failed to capitalize on. The basic idea of using the counterfeit Santa to kick off a kid-centered heist has merit. If they'd actually managed to make that funny, compelling, or exciting, it could have been a good movie. I'm almost tempted to say this deserves a remake, but I doubt they'd manage to duplicate the ghost train or Batman scenes, so what's the point?

Incidentally, the main reason those sequences work is that Ed Asner makes one hell of a good Santa (which is why he's played the role so many times). He does some great work in this movie, and I don't want to ignore that. He's not alone, either - Rene Auberjonois is fun as the sniveling landlord, as is Fred Gwynne as the detective.

Make no mistake, this is a bad movie. It tries to be funny and sweet and fails miserably on both counts. But those scenes at the end are so bizarre, I was glad I watched. Like I said at the start, this isn't the typical "so bad it's good" movie, but I don't know how else to describe it.