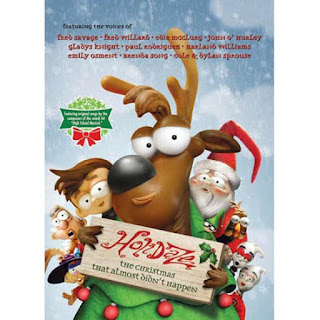 Holidaze: The Christmas That Almost Didn't Happen is a Christmas special you haven't heard of that features fantastic designs, gorgeously animated stop-motion, and an impressive cast. So why haven't you heard of it? Let me check my notes... Oh. Okay. Yeah, that makes sense. I wrote, "Writing matters."

The premise is that a reindeer named Rusty is depressed and unable to find his place at the North Pole. See, he has this famous brother with a glowing red-nose, and... yeah. Hold on. I need to check my notes again - I think I remember... Here it is. I wrote, "This has been done way better in the same medium." Like Robbie, this special isn't able to say Rudolph's name outright, but it implies it and alludes to the classic to a degree I was genuinely disappointed when I failed to find a reference to this being sued.

Holidaze: The Christmas That Almost Didn't have the worst name I've ever seen on a holiday special starts with Rusty trying to stay optimistic despite not being much of a flier, lacking his father's respect, and having a nose that glitches. He tries to find a place to fit in, but he messes up Mrs. Claus's kitchen, gets laughed at by other reindeer, and gets in the way of some elves working in IT who are already failing to install a new naughty/nice list system.

Eventually, he decides that if he can't find an aspect of Christmas he fits into at the North Pole, he'll try his luck in the "Big City." He heads that way, pausing to shill some Cokes with a bunch of polar bears.

I'm not kidding. Also featured in this are product placements for Campbell's Soup, Walmart, Sony's PlayStation Portable, and Ask.com. If you're under the age of 30 and have never heard of Ask.com, ask your parents (*Spoiler* they won't know, either).

Rusty reaches the city and runs into a dog catcher who tries to catch him. For a moment, it really seems like the dog catcher will be relevant to the plot, but that's just an illusion. In this special, NOTHING is relevant to anything. Rusty avoids the dogcatcher for the first of three times that occur randomly over the course of the special. These could be cut out without negatively impacting anyone's enjoyment or understanding. This is also true of the songs. And literally every other second of this hour-long nightmare.

Eventually, Rusty heads to a church basement and joins an AA-style meeting for disenchanted holiday icons. Also present are Cupid, the Easter Bunny, a Thanksgiving Turkey, and twin Halloween ghosts named "Trick" and "Treat." The Easter Bunny convinces Rusty to join her Nativity Play, but he's cut almost immediately. First, though, he's introduced to a kid with a PlayStation Portable who doesn't believe in Christmas.

Rusty tries convincing him of the importance of the matter by explaining only Santa can bring you the one gift you truly want. At first, the kid doesn't believe him, but when his parents are physically unable to understand his request for a helmet, he decides he needs the truth, so he looks for it in the one place he can trust.

Yeah, that'd be Ask.com. And thanks to that sponsorship, he's able to verify the digital system used by Santa to track naughty and nice kids is real. He finds Rusty and explains his change of heart, but the narrator (an elf I haven't mentioned until now because I honestly don't care) informs them there's a clause that a kid placed on the naughty list due... you know what? It doesn't matter. The kid's got to talk to Santa and/or one of Santa's representatives.

Rusty checks in with a mall Santa he encountered earlier (yeah - I skipped that, too. You wouldn't believe how much crap I'm glossing over), but that guy is just a self-obsessed actor who offers little to no help. They head to Walmart for some reason (that reason is Walmart gave them money) and use a computer to access Ask.com in an attempt to communicate with the North Pole. While doing this, they learn the elves still haven't managed to get the new list system in place, and if they don't... there won't be a Christmas.

We're about ten minutes from the end, and this is the first time an existential threat to the holiday has been suggested.

With the help of the other holiday icons, Rusty and the kid try shipping themselves to the North Pole, but the delivery guy informs them they can't ship live animals. But they mention Christmas is in trouble, so he arranges to have them flown over the North Pole.

I'm guessing this was originally intended to be a branded package delivery company, but no one bit. Wise choice, UPS. Very wise.

They reach the North Pole and the kid, using his superior computer skills, is able to get the system up and running. Christmas is saved (you're shocked; I can tell). Rusty, of course, is heralded as a hero, and the kid gets a goddamn helmet for saving Christmas for millions of people who will never realize what he did (seems fair).

The list of things I skipped over include an extended sequence where Trick and Treat try to help Rusty by enlisting bands they know to write him a holiday song, Mrs. Claus running her own cooking show where she attempts to pass delicious Campbell's Soup off as homemade, and several scenes devoted to the Thanksgiving turkey's paranoia about being killed and eaten.

Obviously, this is an incoherent mess structurally, but that's the least of the script's issues. The larger problem is this is focused on delivering joke after subversive joke, and none of them are actually funny. The special is tedious from the start, and it never gets better.

But the animation is... well... it's great. It's stylized, and there's a great deal of movement. The designs on the backgrounds, vehicles, and objects are also cool: clearly, a lot of time and effort went into building this world. If they'd had a better script, I think this could have been something exceptional, but the writing is absolutely awful.