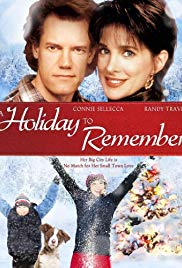 I'm not trying to be clever when I call "A Holiday to Remember" forgettable: it's honestly just the first adjective that pops into my mind. It's been less than twelve hours since I subjected myself to this made-for-TV movie, and I'm already having a hard time recalling details.

A Holiday to Remember belongs to a sub-genre best called the Christmas melodram-rom-com. It sounds specific, but - trust me - there are millions of these things. It tries to appeal to everyone by encapsulating all genres simultaneously, but forgets to do any of them even halfway well.

If there's a reason this was made, it was likely to serve as a vehicle for country music star Randy Travis. This isn't quite his first acting credit, but it shows up early in his filmography. He plays Clay, one of the two romantic leads, though the narrative follows Carolyn, who's played by someone you've never heard of (Connie Sellecca is actually pretty good, at least compared to the overall production values). Rue McClanahan from Golden Girls has a supporting role as Clay's aunt, and that does it for actors you're likely to recognize.

The movie opens with Carolyn, having just gotten divorced, uprooting her teenage daughter from California to move back to the small town she came from. On the drive there, she tells her daughter about a man from her past (Clay), her former next-door neighbor who she'd abandoned at the altar without explanation then never communicated with again.

This just sort of came up in conversation.

Carolyn moves back into her old home, which is now in a state of disrepair. Her daughter, who is apparently also a sociopath, tricks her into stopping by Clay's old house. This goes extremely poorly, both from the audience's and characters' point-of-view.

Soon after, Carolyn and her daughter hear a sound coming from the basement. They call the police, which turns out to be Clay. They investigate and discover a Dickensian street orphan squatting there. Carolyn decides to welcome the child into her house, while Clay wants to place him into state custody. This gets spun into a debate between following rules and doing what's right. For those of you confused, "right" is literally abducting a child without determining where his parents are.

While Clay initially gives in, he does inform state services, who is also his new girlfriend. This spirals into an ongoing feud between Carolyn and Clay, with Clay's aunt taking Carolyn's side. The two kids also get drafted into a Christmas play, but that's less a plot point than an excuse to stop the movie and hammer the whole "the runaway kid is like Jesus" thing into the viewer's head.

The kid gets shuffled around a few times, he keeps running away, then eventually Carolyn and Clay decide to get back together, get married, and adopt him. That's admittedly an overly simplistic synopsis, but - frankly - a complete one wouldn't make any more sense.

The movie feels cheap, even compared to other made-for-TV productions. That said, I wouldn't call it painful. The jokes aren't quite funny, the drama isn't remotely effective, and the romance fails horribly, but all of it is fascinatingly bizarre. Between the absurd anachronisms and the script's ignorance as to how anything works, it's almost worth recommending this as a "so-bad-it's-good" production. But while it comes close, there's not quite enough substance - even bad substance - to justify that honor.

It's far from the worst of its kind, but there's no reason to track this down, unless, I suppose, you're the world's biggest Randy Travis fan.
90's Comedy Drama Movie Romance