The Simpsons: Holidays of Future Passed (2011) 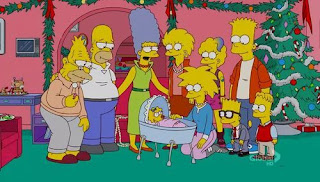 This episode from the twenty-third season of The Simpsons was originally intended as the series's finale, in effect book-ending the holiday special that served as the pilot.

Holidays of Future Passed opens with a Christmas-themed intro, followed by a brief Thanksgiving sequence that transitions into a Christmas photo, which in turn transitions into a montage showing the family growing older over the years. This may have been my favorite part of the episode, honestly - there are numerous clever jokes hidden in this sequence, and I found the vignettes of these characters aging endearing.

When we catch up to the present (or more accurately the future), Bart is a 40-year-old renting an apartment in the ruins of his old elementary school. He's a deadbeat father to a pair of boys who typically live with their mom but are sent to him for the holidays.

Lisa is doing marginally better - she seems to have a successful career and a relatively okay marriage (she's married to Milhouse). She has a teenage daughter who ignores and disobeys her and spends all her time online, in a very literal cyberpunk meaning of the phrase.

Bart decides to take his kids to his parents' house for Christmas, hoping to pawn off the responsibility, and Lisa heads over in the hopes her mother will have some suggestions for getting through to her daughter. Meanwhile, Maggie - now a world-famous singer - is pregnant with her first child. She tries heading home, as well, but winds up on a series of side adventures.

Both Bart and Lisa ostensibly get what they wanted - Homer takes Bart's kids, while Marge offers Lisa plenty of good advice. But in both cases, this only makes Bart and Lisa more miserable. Seeing his formerly abusive father bond with his kids upsets Bart immensely. Meanwhile, Lisa grows frustrated every time her mother suggests giving her kid some space.

They meet up in their old tree house and talk things over. Bart realizes he needs to reconnect with his kids, and Lisa decides to apologize to Marge. Neither of these go well at first - Bart's kids are more interested in hanging out with Homer, while Lisa gets frustrated and decides to ignore Marge's advice and go online to spy on her daughter. At the same time, Marge learns Maggie's in labor and heads to the hospital to join her.

Side note: there's a joke about Google having a doodle commemorating Dr. Seuss's birthday, despite the fact he was born in March, and this episode is explicitly set in December. I realize this is trivial, but... couldn't someone have Googled that first to see if it worked?

Lisa finds her daughter's online room, which includes photos of women she idolizes. Her daughter, who was working on homework, finds her there, and they reconcile. Meanwhile, Bart tracks down his father and finds out he brought his grandkids to his father, in order to demonstrate that all kids hate their dads, and that they should give Bart a chance. Again, more reconciliation.

At the end, everyone's together - including Maggie and her new daughter. One more picture gets taken, and the episode ends.

My understanding is this one was well received by fans and critics, which is something I wish I hadn't known going in. Likewise, knowing the script was at one point thought to be the finale didn't help me manage expectations, either. Ultimately, it's a solid episode, but I don't think it delivers on its premise, and the main reason why comes down to everything I omitted from the synopsis.

This episode is set in the future, a fact the writers exploited to include jokes about future technology and developments. The episode was set in a post-apocalyptic version of Springfield (though the Simpson's home was strangely fine). Likewise, there were dozens of pieces of advanced technology - everything from cyborgs to shrink rays - stuck in for gags. But, with the possible exception of the cyberpunk internet, none of it was really relevant. I didn't leave that stuff out for a reveal; I did it because it's irrelevant to the plot.

Regardless, it came off as a series of distractions from the far more interesting, endearing, and funny character stories going on. Same goes for the appearances of other characters catching up on their lives. A few of these were funny, but none of them really felt interesting.

Maggie's story also felt tacked on. A large portion of this was built around not having her talk, in keeping with tradition. But this joke isn't funny anymore - they have literally done other episodes set in the future where her character was prevented from speaking. Having her give birth was a good way to wrap up her story, and I liked elements of the "unwed mother at Christmas" stuff (they leaned into the joke in a way that worked for me). But ultimately I wish they'd just hired a voice actress.

I like the idea behind this episode, and I thought Bart and Lisa's generational story showed real promise. It's just a shame there were so many distractions keeping the writers from delving deeper into these characters' lives and personalities. This was a fine episode, but it could have been something great. So, while it's not a waste of time, it was a wasted opportunity.

Then again, the series didn't end as planned, so it wound up being just a Christmas episode. So... I guess it's not a huge deal after all.
2011 Comedy Episode Erin Snyder Science Fiction