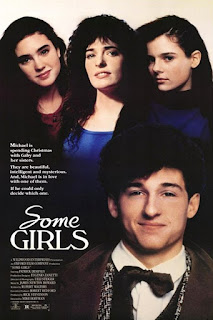 I spent the entire runtime of Some Girls trying to figure out what the movie was, and I'm still not remotely certain. The best description I can muster is: Victorian drama crossed with raunchy 80's comedy. That doesn't really convey the experience of the movie, though, since the description sounds inventive and fun.

The plot... uh... Okay, I'll do my best here, but there's not a lot of meat to this thing. The movie opens with a voice-over from the film's lead, Michael, who's flying to Quebec for Christmas to reunite with his college girlfriend, Gabi, who dropped out due to her ailing grandmother, Granny.

That's her name in the credits, and she's easily the third most important character behind Michael and Gabi. Arguably, she's more significant than Gabi and deserves the #2 spot. She doesn't appear immediately, however. First, we're introduced to the rest of her family, who live in a sprawling massive gothic mansion full of musty libraries and murals concealing doors.

You're liable to spend the first half of this movie hoping Gabi's family are vampires. No such luck.

For the most part, they're just weird. Gabi's father is constantly nude (he's not alone - nudity comes up a lot in this movie in a variety of contexts), her mother is staunchly religious, and her sisters, like her, are... classical muses, I think? They're paralleled with a Renaissance portrait that strongly implies that connection, and it's a pretty good description of how they're portrayed.

Gabi's two sisters are Simone and Irenka, and none of them are very clear as characters. To be fair, that's sort of the point: their father has a monologue at the end of the film about how his wife and daughters are unknowable. More on this later.

After Michael fails to impress Gabi's parents, Gabi informs him rather nonchalantly that she's no longer in love with him. He takes this poorly, mainly because he was hoping to get laid. There's a strong argument the plot synopsis for this movie could be distilled to a long series of attempts to sleep with Gabi or one of her sisters, but I'm going to give the director the benefit of the doubt and focus on the other thing that keeps coming up: Granny.

They visit the old woman in something that feels like a cross between an asylum and a hospital. Like the mansion, the set flirts with genre elements but doesn't pay off. Granny is movie sick, which means she's dying, suffering from dementia, but otherwise seems perfectly fine to move around. When she sees Michael, she appears to recognize him despite never having met him before. However, this is because she's confusing him with her own late husband, who shared his name. Was he supposed to be her Michael in a prior life? Who the hell knows.

There are more shenanigans involving Michael almost-but-not-quite getting laid (80's movies, ladies and gentlemen), then Granny runs away from the hospsylum. She's done this before, so they head to the old, run-down mansion in the country she used to live in. Everyone splits up to search the woods, Michaels falls into a ditch, and Granny finds and rescues him (somehow - this part isn't clear). Michael then takes her to the mansion in the country and takes off her clothes to warm her up.

This scene is as weird as it sounds.

Everyone's relieved Granny's safe again, and Michael continues nearly getting some, seeing one of the sisters naked, then being interrupted or shut down. I think this is supposed to be funny and build out some themes, but it accomplishes neither.

By this point, Michael has built up an emotional bond with Granny, who still talks to him as if he's her husband. And, by now, he's stopped correcting her. He locates a pair of summer shoes she'd left in a tree, and she asks him to hold on to them for her. And this symbolizes... something. Maybe. Probably not. Whatever.

Michael, along with a guy named Nick I haven't mentioned until now (he's mostly here to get more action than Michael and to provide some exposition), loads Granny into a car to take her back to the hospital. The other characters decide to stay in the country, because... well, pretty obviously because the movie wants Michael to have to deal with the next part without them present.

Granny passes away during the drive in a bizarrely dramatic sequence where the camera cuts to show her drawing the curtains in her mansion... edited together with zany chase music as Michael and Nick comically try to rush her to the hospital.

After the funeral, Irenka takes Michael to her studio apartment to screw. So, there's that plot resolved. Michael confesses this to Gabi, who already knew (Irenka had checked with her beforehand). It was fine with her - like she'd said multiple times, she wasn't in love with Michael anyway.

Michael also swings by Granny's grave and runs into a young woman he'd never met before. They speak briefly, and Michael admits he's in love with Granny. The woman kisses him and leaves. Then, during the aforementioned talk with the nude patriarch about how the women in his family are unknowable, Michael finally gets a good look at the portrait of Granny in her prime, and LOW AND BEHOLD IT'S THE WOMAN HE KISSED AT GRANNY'S GRAVE.

The movie wraps up with another voice-over implying optimism about the future and the realization Michael will never be alone. I'm not sure if this was meant to imply a belief in God (he'd had a conversation with Granny about that earlier), if he meant the ghost of Granny would follow him (he's still got her Christmas shoes), or if the writer just scribbled down the first thing he thought of.

Either way, the movie closes with that portrait of the muses again.

Right. Where to even begin?

I want to leave myself a little space here. It's absolutely possible there's something profound or important I'm missing, some famous literary work this is actually a secret adaptation of, or... I don't know... some Rosetta Stone that connects the dots in a way I'd find satisfying if I could only understand.

But, as it is, after my first (and God willing my last) viewing, this just kind of feels like pretentious bullshit. It feels like a film trying to ape movies that are actually artistic and deliver a statement made by a filmmaker who doesn't realize you need substance in addition to style.

To be fair, he's got the style down. This is a beautiful movie, beginning to end. The gothic mansion is bizarre and intriguing, the snowy countryside is stark and lovely, and the hospital is unnerving. The director has the skill to pull off something artistic; he just doesn't know what do with that skill.

I'm not entirely clear on why this was set at Christmas. It may just have been a logical plot point: they wanted this during a break from college, and they wanted the snow to provide a threat when an old lady is wandering around alone. Alternatively, it may have been playing off the otherworldly weirdness of the holiday - this was definitely playing around with having the setting feel like another planet or dimension.

Maybe that's why the characters in Quebec City sound more like British aristocracy than French Canadians.

Like I said at the start, the largest issue I had with this was it didn't feel coherent. There were moments teasing genre elements that kept not paying off (at least until that cliched bit with Granny's spirit). Is it too generous to speculate the tease of genre elements culminating in a brief and ultimately underwhelming ghost sighting is intentionally mirroring its use of sex? Probably, but I'm really digging for meaning in this, and there's an equally good chance all the movie has to say is you can't know what it's got to say.

For what it's worth, the experience of watching this throw seemingly random elements at the screen and cut artistic symbolism around zany hi-jinks kept me from getting bored (though if Lindsay had been writing this, you'd be reading a far more scathing review). It held my interest as I tried to work out what, if anything, was going on and whether or not the movie had a point worth sharing. But in the end, I really couldn't find one.

Even if there is something clever I'm missing under the surface, it doesn't excuse the failed humor and lack of character depth around Michael. "Teenager trying to get laid" was a tired trope in 1988, and the attempts to imply he learned something deeper over the course of the movie fell flat.

I can't recommend this to anyone who isn't morbidly curious. That said, if you disagree and think I'm missing something important, I'd love to know what it is.
80's Comedy Drama Dramedy Erin Snyder Fantasy Movie