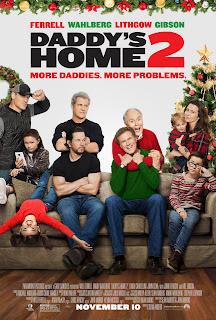 I've never seen the original Daddy's Home, mainly because I don't entirely hate myself, so I'm unable to offer any opinions on how this stacks up against its predecessor. I have, however, seen a elephant defecate, so I can provide some comparison there (said comparison is not favorable towards Daddy's Home 2).

I should mention that, as much as I despised this film, it managed to make me laugh a handful of times. I really, really didn't want to, but - to the movie's credit - there were a few scenes or jokes that really landed. They were exceptions, none of them came close to redeeming the film, and they mainly felt like the movie was mocking us by showing us what they could have made instead... but they were real scenes. I didn't dream them.

Maybe with the trailers. If you don't recall this movie, first of all, I envy you. Second, it's the one with the trailer where Will Ferrell kisses his father, played by John Lithgow, on the lips in front of Mel Gibson.

Rest assured though, this is far from the most offensive incest-adjacent joke in the movie. No, that comes at the end and involves teenage actors.

I feel as though I just glossed over Mel Gibson's role in this thing, as though it's not even an issue. This came out last year, which turns out to be after 2006 and before the date Gibson should be considered employable again (that would be 2256, assuming good behavior). There's really no excuse for him being in a kids' movie. While morally dubious casting doesn't directly impact the quality of a movie, it says a great deal about the judgment of those involved.

You'll note I've written quite a bit without touching on the plot of this movie. There's a reason for that - it barely has one. It's less egregious than some movies I've seen in this respect - there are ostensibly causal and character reasons connecting the end of the movie to the event preceding it - but it's still mostly a mess. The vast majority of the movie's sequences could be rearranged with little to no change to the film as a whole. In other words, most of the second act is constructed out of a series of skits masquerading as a movie.

The first act contains more narrative meat, which sounds like a good thing until you realize a lot of it was summed up by that airport scene in the trailers. For reasons far too stupid to go into here, the two extended families decide to celebrate Christmas together. This is complicated when the grandfathers show up. Ferrell's dad (I'm just not bothering with character names) annoys everyone except his son, and Wahlberg's appeals to everyone except his son.

There are a couple twists here that weren't in the trailers. The first is that Wahlberg and Gibson have a horrible relationship. The movie implies Gibson was neglectful, if not outright abusive (yet another reminder that they clearly did not think this casting through), and Wahlberg isn't ready to trust or forgive him. Meanwhile, Lithgow has been lying to his son about his relationship with Ferrell's mother. As is evident to everyone except Ferrell, his parents have broken up.

Gibson, horrified to discover Ferrell is co-raising his grandkids, sets out to sabotage the extended relationship. To do this, he books them all a large cabin to share for the holidays, leading to the aforementioned sequence of comedic misadventures. The majority of these are obvious, generic holiday fare. That said, there are a few moments that are good. The best of these is a duck hunting sequence revolving around one of the daughters (seriously - Scarlett Estevez is the only person who shouldn't be embarrassed she was in this thing).

Everything eventually culminates on Christmas Eve, when all the deep-seated resentment reaches a boiling point. Then there's a scene where the characters make a hasty and emotional decision not to spend Christmas together after all, but to instead abandon the lodge and head to their respective homes.

Hold on a minute. I just got to check my notes, because... yeah. I see what happened here. That should have read, there "ISN'T" a scene where all that happens. Because we just sort of cut between a scene where they fight at a manger and one where they're all leaving on Christmas morning. We never see any scene which explains how or why the third act is kicking off.

Not that I really wanted to sit through another five minutes of this garbage, but... that's some damned sloppy storytelling.

A freak Christmas blizzard (original, I know) forces everyone off the highway. But since it's Christmas, they all wind up in a movie theater together. The blizzard then cuts off the power, and they rekindle the magic of family through the power of cinema and the song, "Do they Know it's Christmas?" I'm not exaggerating when I say there's an extended monologue about the power of movies that somehow manages to be offensively self-congratulatory and still undermine itself by trying to be subversively self-aware.

The inclusion of "Do they Know it's Christmas?" is a bit more mixed. It's an awful song, the set up earlier was obvious, and the fact there's a rendition of the cast singing it in its entirety over the end credits makes the world a far worse place. All that being said, it did give John Cena a chance to deliver the funniest line of the movie.

It's a shame to see Ferrell wasting his time on this crap. I know he's a divisive comedian, but I'll stand behind calling Elf one of the best holiday comedies ever made. He's capable of much, much more. Most of these actors are. They're better than this.

Although... now that I think about it... maybe I was too hasty in complaining about Mel Gibson's casting. Maybe this is exactly the kind of movie he deserves to be remembered for.
2017 Comedy Erin Snyder Movie Sucks