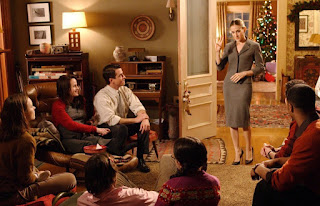 The Family Stone is a dramedy about... God, I can't believe I have to type these words again... a dysfunctional family celebrating the holidays together.

There are several things the movie does wrong, but one in particular is going to make it astonishingly hard to synopsize: it lacks a solid POV character. I think they were aiming for an ensemble cast, but the goal in those movies is to have multiple points of view - I'm not sure The Family Stone has any.

The closest actually might be Meredith, played by Sarah Jessica Parker. She's the new girlfriend of the titular family's oldest son, Everett Stone. The movie opens with her, and she gets a lot of screen time. But practically, she's closer to the comic relief than the lead. Parker plays Meredith to an over-the-top excess - she feels like she stumbled out of a farce without realizing everyone else is in a drama. And structurally, she's the false love interest, the wrong girl for Everett. He wants to marry Meredith, and he wants his grandmother's wedding ring, which his mother promised him but doesn't want to hand over.

That's right - the title's got two meanings, and both of them are stupid.

The thing is, despite its supposed significance, the ring doesn't really come up all that much. It's clearly intended to be the focal point of the movie, but aside from a short, dull argument and a few callbacks, it barely matters until the end. Also, it doesn't matter all that much at the end.

Speaking of things that don't matter, we need to talk about Everett. This is because everyone talks about Everett. His parents and siblings spend a great deal of the movie analyzing his problems and worrying about his decisions. Everyone in the movie cares about him.

You, however, will not. He's played by Dermot Mulroney, who's barely given any dialogue. Mostly, he's there to look mildly annoyed until Meredith's sister, Julie - destined to be the real love of his life - steps in. Then he looks mildly amused. We're never given a sense of his character or personality beyond him being a spoiled, entitled generic white guy. His proximity to the movie's narrative is almost a personification of white privilege: we're supposed to recognize him as the lead because he sort of looks like a lead.

The rest of the Stone family is far more interesting. Diane Keaton plays Sybil, the matriarch who's secretly dying of cancer. She got nominated for a few awards for her performance, which isn't too surprising. Craig T. Nelson is her husband, Kelly, who's good in a fairly generic role.

The other siblings are Ben, Susannah, Thad, and Amy. Of the group, Ben is the most important and - in keeping with the pattern being developed - least interesting. He's sort of the opposite of Everett, so naturally, he's Meredith's soulmate. This is telegraphed the moment they meet with a shot of him looking up at her. But, again, you won't care, because none of the leads are interesting or likable.

Thad, on the other hand, is kind of great, as is his husband, Patrick. Thad is deaf, which of course alters how the family communicates. In addition to the inherent value of representation, this does more to connect them than anything in the film. On top of that, Thad and Patrick feel like likable people with complex lives. But they're a gay, biracial couple who communicate in part through ASL - obviously the central characters need to be the boring white people.

Amy gets some screen time, but most of it's built around her trying to sabotage Meredith. Amy isn't really a good person, but she at least feels interesting and clever. Susannah, meanwhile, is pregnant. Oh, and she watches Meet Me in St. Louis at one point, facilitating a montage of characters interacting while Judy Garland sings "Have Yourself a Merry Little Christmas." That's... pretty much all we get from her.

Structurally, the movie's a mess. It's packed with minor significant characters but lacking a single compelling lead. Likewise, there are too many conflicts competing for the narrative for any to actually rise to the level of a central plot. Is this about a dying matriarch wanting her family to survive her? Is it about a pair of broken people who need to be healed and paired up with each other's sibling? Is it about a Christmas falling apart due to family infighting?

I think this might have been salvaged in the end, if they'd declined a generic ending. There was a point I'd hoped Meredith and her sister would just leave the Stone brothers behind. Everett in particular acts horribly - why does Julie like him? But he's a tall white guy, so he gets a girl.

For all these issues, this isn't a horrible movie. Aside from Meredith and a brief, generic sequence of fights, misunderstandings, and food getting ruined, this plays out more like a drama than a zany comedy. Like I said before, Keaton does great work, as does much of the cast. We almost never get characters like Thad, and his presence is a welcome change of pace.

If the ending had been courageous and just skipped the "everyone gets together" cliche, I'd have reached a much more favorable conclusion. As it is, the movie isn't awful, but it just doesn't work.
00's Comedy Drama Dramedy Erin Snyder Movie