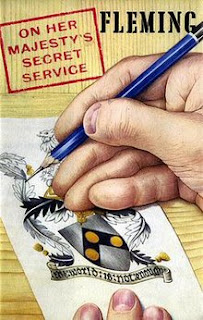 So when we were researching Christmas espionage for the podcast, I realized I never wrote a review of this novel. And that was an oversight that could not stand.

I need to start by saying that I enjoy the Bond books. They are dated. They are sometimes awful. But I love the style, and I love how much more complex they are than the films.

For one thing, the series, taken as a whole, is the story of a man who has a thankless, terrible job that forces him to be a heartless weapon. The books very seldom glamorize the life of a spy.

In On Her Majesty's Secret Service, Bond is tired of it all. He's ready to chuck the whole career in the bin, and he grasps at his whirlwind romance with Tracy as one bright thing, a light at the end of the tunnel. When we meet her, she's traumatized and suicidal after being abandoned by a husband and the death of a child. Bond is drawn to her need for rescue, but we never see whether the relationship would have worked out.

One detail I really enjoy about this book is how low-tech it is. Bond very specifically doesn't bring anything with him that would undermine his cover, and when he realizes he needs to escape Blofeld's base, he carefully stockpiles as much makeshift gear as he can throughout the day in preparation for the midnight ski chase. Blofeld's plan is much more grounded in the book as well - he doesn't have a mystery super-virus, he has ordinary plant- or animal-specific pests that he is planning to have the brainwashed girls introduce to destroy Britain's food supply.

Christmas plays a somewhat larger role than in the movie. Bond and Tracy escape through the village holiday fair in both, but in the book, after dispatching some villains through a combination of Tracy's accomplished driving and a dirty trick from Bond, Bond sends Tracy to safety and returns briefly to Britain to debrief and plan the next step. He imposes on M's Christmas dinner with his report, and many asides through this sequence mention that everyone in the service is not surprised to work on the holiday.

As a warning: there is one horrifically homophobic aside when talking about "problems" that can be "cured" by hypnosis.

However, as I said at the start, I still really enjoy the tone, the description of the action, and the sheer style that the best books in this series share, and I think this is one of them.
60's Book Lindsay Spy