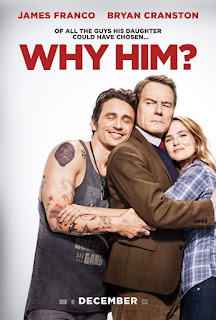 Why Him? is a raunchy farcical version of a story the movie industry loves to tell over and over: father disapproves of daughter's boyfriend, shenanigans ensue. In this case, the father is played by Bryan Cranston, and he's the owner of a now-struggling printing business, while the boyfriend, played by James Franco, is an eccentric self-made app-store mogul.

The daughter (Zoey Deutch) gets her family to visit her and the boyfriend in California for Christmas, and awkwardness follows. Franco's character swears unstoppably and is emotionally needy, relentlessly sexual, and socially clueless. Once the father finds out that the boyfriend intends to propose and the daughter is contemplating dropping out of school to run a nonprofit the boyfriend will supposedly fund, he goes into a progressive freakout where his attempts to undermine and find evidence against the younger man provoke an all-out breakdown.

All this between jokes about complex high-tech toilets, too-realistic AI assistants with attitude, boobs on Game of Thrones, and sexual acts which I will not mention because this site is not currently X-rated. It's set at Christmas to raise the stakes for the family getting along and bring up all sorts of Midwest/California culture clash.

If all this already sounds tedious and annoying, you're not wrong. This is not a good movie by any metric. However, I didn't find it completely irredeemable.

First, let's mention Keegan-Michael Key. As the tech mogul's assistant/personal trainer/spiritual guide/father figure/wingman/friend, he manages charm and humor as a character who could easily have been painful to watch. He featured in one of the only scenes Erin liked -- the assistant attacks Franco as training, a la the Pink Panther, but when Bryan Cranston mentions it, the joke is actually that neither younger guy recognizes the reference.

The most refreshing aspect is the writing on the daughter. Although the set-up would have her be effectively the McGuffin the men are struggling over, every time she speaks she is intelligent and caring, and she humanizes everyone else on screen. Her positions make sense. She neither makes excuses for her boyfriend's behavior nor sides wholly with her parents.

On that note, I felt that despite the huge exaggeration for comedic effect, I empathized with Franco's character. This caused me to give the movie more benefit of the doubt than Erin did. While I have much more social awareness than the character, I also sometimes have no filter, over-share or over-explain awkwardly, or swear like crazy and then swear about the fact that I swore. It helped the movie that he seemed so genuine, just trying way too hard.

And I will admit that I laughed hysterically at the end when Franco's character decides not to go with a hyper-extravagant proposal, but then can't communicate that to his assistant, who proceeds to release doves, smoke, and... the band KISS. I thought that was pretty funny.

Of course, most of the other humor is awkward or cringe-inducing for no reason, and there are many scenes which felt like they came from a different screenwriter. So I don't recommend this in the end, but if you like obnoxiously raunchy comedy, this one is...set at Christmas?
2016 Comedy Lindsay Movie