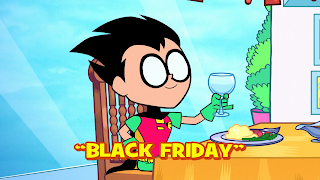 I wanted to hate this.

I'm getting that out of the way first, so you have some idea of where I'm coming from. On principle, I dislike this series, not so much for its content but for what it represents. I liked the original Teen Titans, as well as Young Justice - the last thing I wanted was a hokey show that reduced the characters and premise to cheap jokes.

So I set out to hate this. But then... then something went wrong. Horribly, horribly wrong. This episode elbowed me in the gut, kicked me in the shin, then reached in through my cold chest and violently wrenched my heart away from me. It made me love it, whether I wanted to or not.

That's also a fairly good synopsis of the premise.

As the title suggests, this episode focuses on Black Friday, presented here as the cultural juggernaut it truly is. The Titans are preparing to shop by gorging on turkey. With one exception, they're eagerly awaiting their favorite day of the year, when they'll charge into stores and battle hordes of angry shoppers in the hopes of getting the best deals possible.

But not everyone is excited. Starfire, sick of the violence and materialism, decides to stay home. Her friends try to remind her how important objects and savings are, but she just doesn't care. While they get ready to head out, she retires for an early bedtime.

Enter the first of the three ghosts.

A spectral version of Robin takes her back to watch the previous year, when being polite cost her the chance to buy a powerful sound system, without which her friends were doomed to watch TV with sub-par audio. Although she still considers the holiday "barbaric," the realization her refusal to assault her fellow shoppers may have resulted in her friends' sadness distresses Starfire. She sets out to find them, despite still vowing not to shop.

She finds the other Titans at the front of a line outside an electronics store. Her friends are initially glad to see her, but when they hear she still isn't interested in celebrating the holiday, they refuse to let her cut in line and wait with them. Instead, she goes to the back and falls asleep.

Cyborg and Beast Boy act as ghosts of Black Friday Present. They provide a glimpse of the happier aspects of the holiday before Starfire's awoken by the stampeding crowd trying to get into the store.

She tries reasoning with the crowds of violent shoppers, but is only knocked unconscious for her troubles. This brings her to the final ghost, who's of course played by Raven. Starfire is taken to see what will become of her friends if she continues down her current path. She finds Beast Boy, Robin, and Raven living in an alley after paying too much for electronics. When asked where Cyborg is, the ghost of Black Friday future informs her he was crushed to death trying to get a cheap TV.

Starfire pledges to change and to honor Black Friday in her heart. Then, upon waking, she yells at employees and brutally attacks her fellow shoppers before rejoining her friends and helping them score the best deals. The episode ends with a visit from Buster, the spirit of Black Friday, who thanks them for believing.

If you're waiting for some sort of twist or turnaround which delivers a moral other than "GET WHAT'S YOURS," you'll have to wait for a different holiday special, because this one doesn't give a damn about any of that. It's more than happy to not only end with a message of greed and anger, but to reward its characters for buying into it.

Sure, anyone over the age of thirteen will probably appreciate the satire inherent in this conclusion, but it's the knowledge that many - perhaps even most - of the show's fans are in the five to twelve range that gives me hope that the true meaning of Black Friday will endure for generations to come.

It's that thought, along with the fact that the humor in this episode was consistently funny, that endears this so close to the hollowed-out cavity where my heart once sat. It's truly, unapologetically willing to subvert ethical expectations and deliver a laugh.

On top of all that, this actually works as a surprisingly faithful retelling of A Christmas Carol. Sure, the message is a bit garbled by the shift from Christmas to Black Friday, but the core is the same. They manage to slip in quite a few lines and moments from the source material in a way that feels fresh - not a lot of rehashes of Dickens's classic can claim that.

This is a fun, horribly immoral holiday special. All that in around eleven minutes of screen time - you'd be hard-pressed to beat that.

Just make sure you watch this with your youngest family members to ensure they grow into slightly worse people.
Comedy Episode Erin Snyder Highly Recommended Superhero