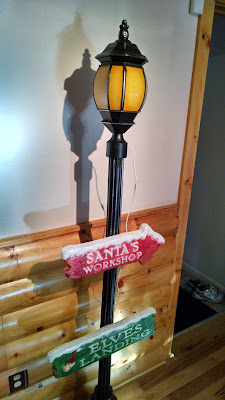 While keeping Christmas in our hearts all year round may be too ambitious a goal for even us, we find that doing the bulk of our holiday shopping in the weeks after Christmas can extend that yuletide feeling well into January. Also, it saves us a ton of cash, largely thanks to the fact that stores unload any remaining junk at steep discounts once the 25th has come and gone. 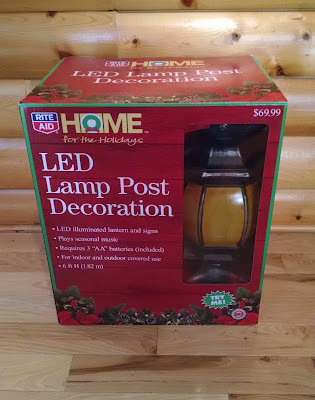 The decorative piece I'm looking at today is no exception. This was originally priced at $69.99, though I'm not sure I ever saw it selling for less than half that. As soon as last year's seasonal merchandise was on the shelves, it was joined by a 50% sign that never seemed to disappear. For all intents and purposes, retail on this thing was thirty-five bucks, which is probably good, because there's no way in noel this is worth seventy.

Personally, I wasn't about to pay thirty-five, either: I held out until early January, when it got marked down to 75% off, which means I paid about $17.50. That's quite a bit more reasonable.

Conceptually, this thing makes sense - it's basically a lamppost that lights up and plays MIDI holiday tunes. The music feature is mercifully optional - there's a setting where it just lights up until you either turn it off or it runs out of batteries.

The other setting causes the light to shine while one of eight public domain tunes play with all the dignity of a handheld 8-bit video game system. This occurs anytime there's a loud noise in the post's vicinity or whenever it gets jostled.

Visually, there's plenty to like and to hate, depending on how generous you're feeling and how your expectations are set for a piece of holiday decor you bought at a drugstore. At a distance, it's actually pretty cool, with a few caveats. They did a good job capturing that olde timey look, and at six feet tall, you're at least getting something substantial. The light isn't as bright as I'd like, but it's decent, all things considered. And the yellow lamp looks good in the dark. 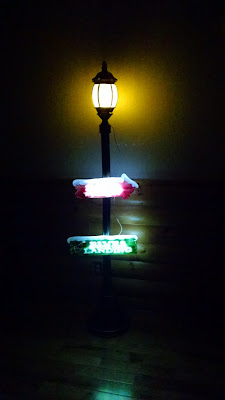 My largest complaint is with the decision to put the bulk of the electronics in the plastic signs. The lower one plays the music and feeds power to the upper sign and the lamp, all three of which light up. I'd rather they skipped the light up feature in the two signs, moved the batteries to the base, and gave you the option of displaying the unit without the cheesy signs. There's probably a pretty easy work around for this involving a trip to RadioShack, but I'm not really interested in putting that kind of effort into what amounts to an impulse buy at a Rite Aid.

Also, it would only exacerbate my second and third largest complaints: the poles snap together crooked, and the the paint is pretty cheesy up close. While the signs may be mediocre, they do a decent job hiding those flaws.

They don't do quite a good a job concealing the white wire going from the battery case to the top sign and finally up to the lamp: Likewise, they look like cheap crap from the back. 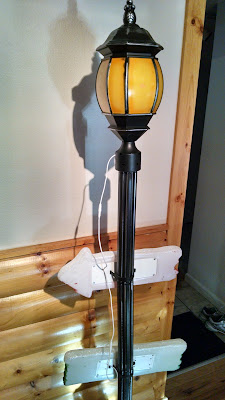 All in all, this is a decent piece, but nothing fantastic. I'd be livid if I paid seventy bucks for this, but - once again - it seems unlikely anyone did so. At seventeen fifty, I feel like I got a fun, if flawed, decoration. Incidentally, this is an indoor or "outdoor covered" decoration: it's not intended to be plopped down in your front yard (which is actually where it would look coolest). But it should make for a good addition to this year's indoor decorations.

Also, it would probably work well for Halloween - this thing is all kinds of creepy.
Erin Snyder Ornament