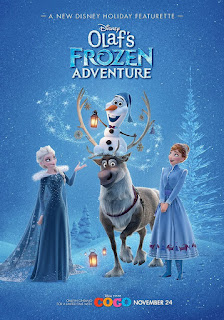 We covered Frozen back when it came out, despite some disagreement on whether it should count as a Christmas movie. (We've since decided it should be classified as Christmas in July.)

But with this new special there's no room for disagreement or confusion. It's Christmas in Arendelle.

The premise is that it's the first holiday season since the events of the movie, and so it's the first opportunity that royal sisters Anna and Elsa have for a holiday celebration both in public and together.

They decide to throw a party, but after a public ceremony, the local folks all have their family traditions to get back to. The sisters realize that their lives have been so circumscribed by hiding Elsa's powers that they don't really have any traditions of their own. Olaf sets out to save the day by collecting traditions from the townspeople. Naturally, complications ensue.

I loved this. I sat through it with a big stupid grin on my face the whole time. I liked the story, the humor, the music (not quite as great as the original, but solidly fun), the corny-sweet ending.

Whether or not it necessarily makes sense, I loved that there were people in vaguely-Scandinavian Arendelle celebrating Christmas, Hanukkah, Solstice, and St Lucia's Day. (Shout out to other Kirsten-owners from back in the day.)

Erin had a few quibbles about the size of the town/kingdom, and he wasn't as immediately charmed by this as I was. My main structural quibble is that a 21-minute special with four new songs doesn't really have time for two of those songs to have effective reprises. To me, those reprises felt like lazy ways to hit emotional beats. My only other experience quibble was that it took me a few minutes to readjust to Kristen Bell's voice being Anna of Arendelle rather than Eleanor Shellstrop.

Olaf's Frozen Adventure is currently playing in theaters before the new Pixar film, Coco. I noted that it takes place at Christmas, and Coco takes place on Dia de Los Muertos, so the film release date splits the difference by landing on Thanksgiving. It is quite long for a pre-movie "short," though, and I'm sure it will be released alone or alongside the other Frozen special at some point.
2017 CG Lindsay Musical Special