Mystery Science Theater 3000: The Return: The Christmas That Almost Wasn't (2017) 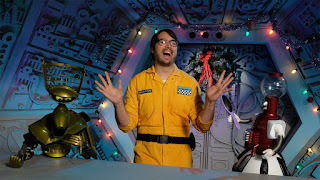 If you haven't tried the new episodes of MST3K, available on Netflix, you should. They are a lot of fun, they keep what worked about the original formula while adding new twists, and you'll know what I'm talking about when I say that one of my life goals is now to have as much fun as Felicia Day is having every second she's on screen.

The cast features a who's who of the geek-culture parts of the internet, with Day and Patton Oswalt as the recurring villains and brief guest appearances including folks like Neil Patrick Harris, Mark Hamill, and Wil Wheaton. I've watched 12 episodes and I'm still amused by the inclusion of commercial bumpers as if the show were made to have commercial breaks.

These episodes have more ongoing plot in the scenes that break up the movies than I remember from the original show, but I probably never saw more than one episode in a row before. This episode in particular is building toward the season finale.

So make some popcorn and revisit the Satellite of Love, just... maybe don't start with this one.

We watched this movie a few years back, and it was bad and boring. It turns out that it's so boring, even MST3K can only help so much.

There's so much exposition in the first part of the movie that the cast had trouble getting a word in edgewise. They soon set up a running joke where the lawyer character just wants to be a "wittle baby," which is odd at first but gets funnier through repetition. The movie is just so uncomfortable to watch, even with clever commentary.

I don't remember being fond of the breaks in the movie in the original show, but in these episodes they often feature clever songs or truly funny vignettes. One good one in this episode is Jonah and the bots trying to come up with less-scary explanations for the horrifying toys sold in the toy shop in the film. I didn't personally think much of original host Joel's walk-on role as Santa, but the very final segment was hysterical.

The set decoration leans into the Christmas theme. This is overtly a Christmas episode, despite one character lampshading the fact that since the show's on Netflix, almost no one will be watching at the holidays.

Overall this wasn't one of the best episodes of this season, but it's a far better choice than watching this movie without the help of your robot friends.