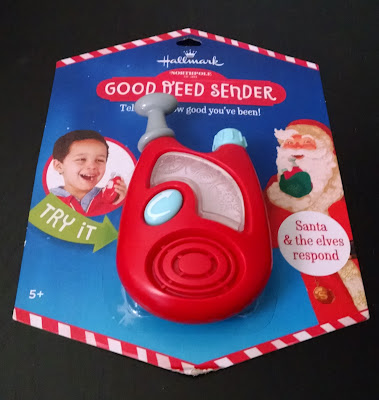 God, Hallmark is producing the hell out of this stuff.

I reviewed the Northpole Communicator last year. If you're too lazy to click on that link, it's a toy old-fashioned radio communicator that supposedly connects you to Santa's operation for a quick daily chat. The toy is kind of ridiculous, but in a good way: I thought they did a decent job with it.

The Good Deed Sender is a similar concept, only it's pared back to a handheld device. Also, I was much less impressed with the content of the messages.

Obviously, the selling point is the price. This is substantially cheaper than the larger, superior communicator. How much cheaper?

Honestly, I don't know. I can't even tell you what we paid for it, and I can promise you it was less than retail. 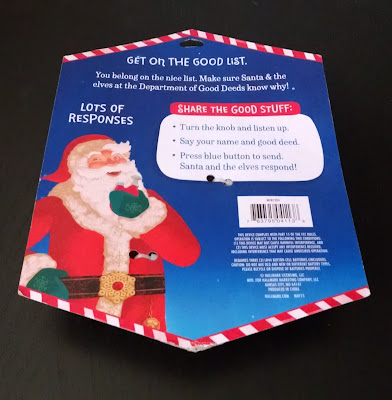 The instructions on the back are all this comes with - there's no "secret instructions" for parents this time. You just tear it off, pull out the plastic tab that limits its function to the generic sale pitch you get for the Try-Me feature, and you're ready to get started. 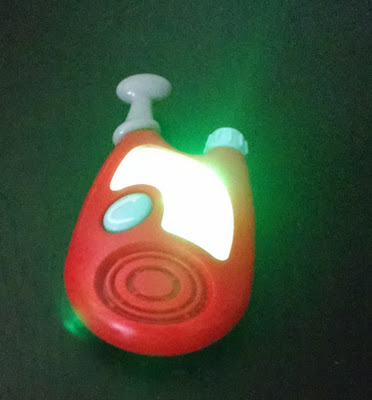 The design of this is pretty minimalist. Turn the blue knob to fire it up, and you'll hear the sound of static (same one that was in the communicator, if memory serves), followed by a quick greeting from Moxie, Trixie, or Jinxie the elf asking for your name and good deed. The light flashes green as they speak.

Needless to say, it doesn't make a damn bit of difference what you say. You can tell them your name is Satan and your good deed was biting the heads off Christmas elves, and they'll respond with the same gleeful encouragement.

There is one caveat. If you hit the reply button immediately after they've spoken, you'll get a reply saying they didn't catch what you said and asking you to repeat yourself. That's a decent enough touch, I suppose. If they'd put in a microphone that tests for noise, it would have been even better. But that's probably asking a lot.

The light's red during the reply phase, though of course it doesn't flash in response to you speaking (again, that would have required a mic and probably a higher MSRP). To be fair, both red and green lights are bright, and the sound is loud. 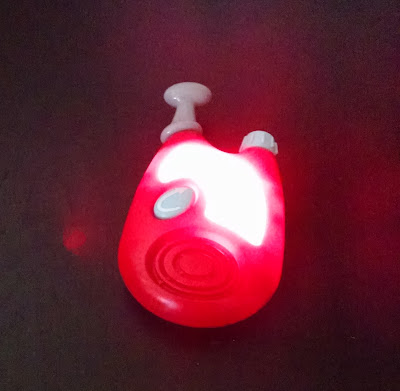 Once you wait a second and hit the reply button, you get a response from the elf. Sometimes they grab Santa and put him on the line to give you a few words of encouragement, too. There are a decent number of different lines - I think I counted ten or eleven, and that doesn't count different combinations (it seems as though Santa's bit can combine with different elves).

That's a nice touch, but it would be nicer if any of the content felt unique. Functionally, you're getting some variation of an elf saying, "Hi, who are you, what's up," followed by the same elf saying, "Cool, you rock," and/or calling in Santa to say the same. The variations are pretty minor and not all that interesting. It's a bit of a missed opportunity - they could have made the recording more interesting without complicating the device's design.

I appreciate the lights, and the content variation could be worse, but I'm certainly not all that impressed. I do like that they went with a retro-SF concept sort of reminiscent of the Jetsons - that was a decent touch.

It doesn't have any kind of limits on use (assuming you're willing to swap out the batteries) the way the Communicator did. There's no internal calendar or countdown mechanic, and - with the exception of Santa saying "Merry Almost-Christmas" this could be used by brown-nosed brats showing initiative in May. I guess that's a good thing.

Still, it's far less fun than it's bigger cousin. I'm betting most kids would get sick of this pretty fast... as will their parents. Like I said, the volume on this is pretty loud.
Erin Snyder Toy