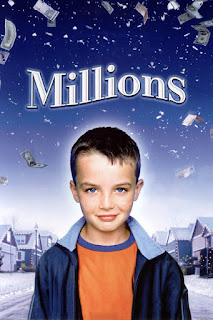 What the hell is wrong with America? Annually, we watch movies like National Lampoon's Christmas Vacation or A Christmas Story again and again, as if our sheer, culturally mandated refusal to admit they're crap will somehow elevate them to the status of genuine classic.

Meanwhile, England's been cranking out genuine holiday brilliance at a breakneck pace, and no one here notices. Arthur Christmas, Get Santa, and The Snowman are almost entirely unknown in the US, and they're all incredible. Add Danny Boyle's 2004 surrealist comedy, Millions, to that list - this thing is amazing.

The movie's main character is an eight-year-old who's just lost his mother. His name is Damian, and he's obsessed with Catholic saints. Also, he sees them. Arguably, he merely hallucinates meeting and interacting with them, but I'm not buying that. They seem to have knowledge he lacks, and they're capable of affecting the world in at least minor ways.

He's just moved to a new home with his father and older brother, who's as obsessed with economics as Damian is with saints. It's also worth noting the story unfolds during the lead-up to England changing from the pound to euro; money which isn't converted will soon be worthless.

Since we've already established Americans are idiots, it's worth noting none of this happened. The United Kingdom has not adopted the euro, has no plans to do so, and the majority of the country is against the idea.

In the interest of full disclosure, we first watched this movie before Brexit happened, and I had to check Wikipedia to verify all that. Like I said - we're idiots.

Moving on, Damian is sitting in a cardboard fort talking with a saint when a train rolls by. Suddenly, a gym bag full of money smashes into the fort, partially demolishing it.

Reasoning the money fell out of the sky, Damian shows his brother and starts trying to think of ways to give it to the poor. Meanwhile, his brother tries to think of ways to improve his life. To be fair, many of Damian's solutions backfire. With the help of Saint Nicholas, he anonymously gifts a wad of cash to a household of Mormon missionaries, but they wind up spending it greedily. When he tries dropping a thousand pounds in a donation bin to help build wells in impoverished areas in Africa, he attracts unwanted attention from the school.

But the real unwanted attention comes when a thief who stole the money comes looking for it. He realizes Damian has it almost immediately and breaks into their house looking for it. He doesn't find it, though his actions result in Damian's father discovering the cash. The father enlists the boys and his new girlfriend to help him exchange the money the next day.

The thief doesn't give up, either. When he tries to get the money, he winds up running into the police. Meanwhile, Damian runs off and burns the money. As he does this, he's visited by his mother's spirit.

The synopsis really doesn't do justice to the film, though. Visually, this borrows from things like Fight Club, warping perspective and reality in front of the viewer. It's stunningly shot and directed, and there's a subtle believability to the kids' reactions and emotions. They leverage the death of their mother to evoke guilt in adults, even as they are trying to work through their feelings: this is a nuanced piece.

I do think the ending gets a little bogged down trying to do too much at once. It works to resolve the main character's arc, offer a solid conclusion for the other characters, and also make statements about morality and politics. None of this is bad, but it gets a little overblown in the closing minutes. Still, I'll forgive it for the visuals alone.

The holiday elements take a religious form here. The sun and moon transform into the Star of Bethlehem, and - like many other elements - we're never really told if it's only in Damian's head. There's just enough to establish not everything he sees is a dream, but it's also clear not everything can be real. In addition to Saint Nicholas, we also get to see Joseph offer Damian his thoughts on a Nativity play. There's a biting humor to all of this that's hard to oversell.

In general, I prefer non-Christian elements when it comes to fantasy, but this handles religious aspects so deftly, it pulls itself onto my short list for best Christmas fantasies, Jesus and all.

This was an absolute pleasure to watch. If you're looking for something that skews a little closer to magical realism, this is the holiday movie to track down. It's a Christmas movie - ostensibly a family one - that's closer to Charlie Kaufman than the drivel that's normally associated with the holidays.