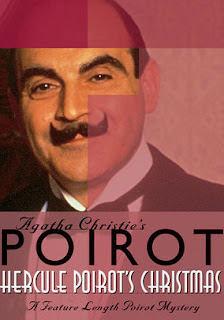 I know I read the book this is based on, I have the review to prove it, but I have no memory of it. A quick read of my review tells me it’s a common Christmas mystery plot - family gathering, locked-room murder of the head of the family. See also: The Santa Klaus Murder, 8 Women...

The episode opens with some unnecessary backstory to establish the twist ahead of time and confirm that Simeon Lee is a murderer and a rake, so we won’t care when he gets murdered. Then it jumps ahead to Simeon as an crotchety old bastard bent on emotionally torturing his spineless kids over the holidays. Everything is very by the numbers and all of these characters are morons.

Simeon made his money in diamonds, and a lot of the red herrings in the plot follow some uncut gems he receives. It’s funny, because uncut diamonds don’t look like much, so it’s hard to remember why everyone’s so wound up over them.

Finally we bring in Poirot, who is invited along to the holiday party because Simeon claims he “fears for his life.” Poirot only agrees to go because the heat in his building is busted. (In the book, Poirot is called in after the murder occurs, which makes a bit more sense, as it was never clear to me what Simeon intended to accomplish by having Poirot around.)

There’s a lot of “humor” around Poirot and his continental fussiness. It might work better if you already have a background with the character, especially as portrayed by this actor, but it mostly fell flat for us. Also, Poirot’s mustache looks just slightly off center, and it distracted me through the whole thing.

After introducing all Simeon’s kids and extended relations and reaffirming how horrible he is, he’s finally killed. There’s various combinations of people, false trails, lots of clues so the viewers can feel smart, and Poirot solves the case. Hint: the killer is the jerk’s secret son by the lady he screwed over in the intro.

I guess it wasn’t bad, but neither was it compelling, surprising, or particularly well-produced. I found it too long and dull to recommend.